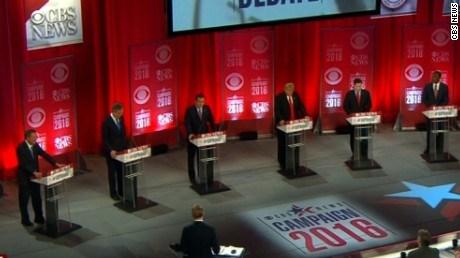 Saturday night former Presidential Candidate and South Carolina Senator Lindsey Graham said it's likely the Senate will not confirm a Scalia appointment made by President Obama. Instead Graham says it's up to the next president to make that choice.

On the debate stage the six republicans left in the presidential field agreed when talking about the late Supreme Court Justice.

"I think it's up to Mitch McConnel and everybody else to stop it, it's called delay, delay, delay,” said Donald Trump.

“It's amazing, it's not even two minutes after the death of Judge Scalia, nine children here today their father didn't wake up, his wife sad, but I just wish we hadn't run so fast into politics," said John Kasich.

The debate moved on to other issues like how the candidates can handle a crisis, their stance on foreign policy and defeating ISIS, the economy and their own record. The debate stage was smaller with just six candidates, but the tension between them seemed even more tense.

Bush: “He's had the gall to go after my mother. Look, I won the lottery when I was born 63-years-ago looked up and I saw my mom. My mom is the strongest woman I know.

Trump: “She should be running!”

Bush: “This is not about my family or his family, this is about the South Carolina families that need someone to be a Commander in Chief and lead.”

Cruz: “Marco went on Univision, in Spanish, and said he would not rescind President Obama's illegal executive amnesty on his first day in office. I have promised to rescind every single illegal executive action including that one.”

Rubio: “Well first of all, I don't know how he knows what I said on Univision, because he doesn't speak Spanish. and second of all, the other point this is a disturbing pattern now, because for a number of weeks Ted Cruz has just been telling lies.”

The people in South Carolina will vote in a presidential primary in one week.