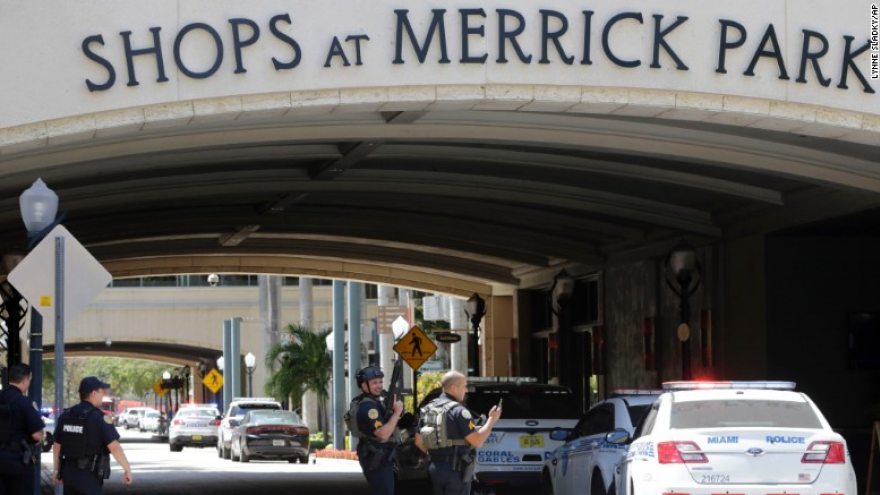 (CNN) - A former employee at a Florida gym opened fire on two former co-workers during a dispute Saturday, leaving one person dead and two others wounded, police said.

The shootings at the Equinox Fitness Club at the upscale Shops at Merrick Park mall in Coral Gables occurred during an argument between the ex-worker and the gym's manager, Miami-Dade Police Officer Alvaro Zabaleta said.
Two people were airlifted to a hospital, Coral Gables Fire Department Lt. David Perez said. Another person was pronounced dead at the scene. He said no one was being sought in connection with the shooting.
\"Initially we thought it was an active shooter ... but there was a Coral Gables police officer at the mall at the time who was able to quickly determine it was a targeted shooting,\" Zabaleta said.
The gunfire sent shoppers running for cover, according to witnesses. The mall was on lockdown for a time until police secured the scene.
In videos posted on social media shortly after the shots rang out, an automated recording is heard: \"Emergency -- evacuate or seek shelter.\" Sirens blare in the background.
Tim Hartog, general manager of Yard House restaurant, said the business was on lockdown.
\"We had everyone underneath tables and got everyone to the back,\" he said. \"There's police everywhere.\"
Susan Amat tweeted from the restaurant's kitchen: \"Pray for safety for everyone at Merrick Park right now - everything is locked down - we're in kitchen of Yard House. Go Coral Gables Police!\"
Anais Michelle said she was walking into the mall with her mother when she saw people coming down from the third level, some crying about a shooting at the gym. Michelle said they hid in the back of a store.
The shooting started about 1 p.m., witnesses told CNN affiliate WPLG,
Police said the area was secure about 40 minutes later, the station reported.
Share this article: