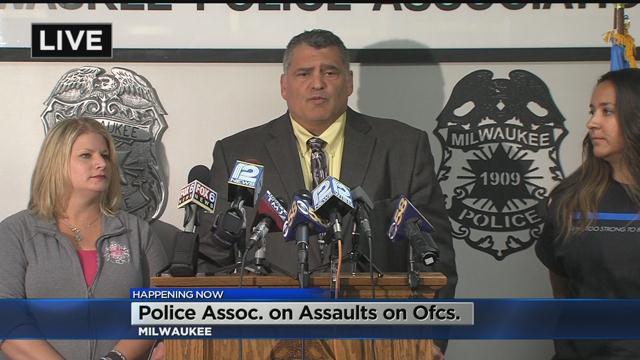 Mike Crivello, President of the Milwaukee Police Association held a media conference Tuesday with 'Shielded Hearts" a support group of significant others in law enforcement.

"It's really important that the community knows that those individuals riding out in those squads, wearing those uniforms are human beings." Crivello began.

Crivello said he invited all city officials, including the mayor to attend.

He recognized and expressed appreciation that Alderman mark Borkowski was present for briefing which was carried, in part, live on the CBS 58 News at 4:30 p.m.

Teresa Robinson, Executive Director of Shielded Hearts, said it has been a trying time for law enforcement and their families.

"Many of the women have mixed emotions about their husbands and fathers of their children," she explained. "A  lot of them feel that people don't see the real person behind the badge. They're  fathers sons, wives and mothers."

She says while law enforcement families accept the risk the current events have gone beyond what should be expected.

"This is not what they signed up for," Robinson said. "They signed up to protect and serve, not to be hunted and tried like they are now."

Robinson went on to say that long hours away from family is to be expected, but the constant strain has reached new and unbearable levels.

Chief Ed Flynn in announcing the two officer procedural change was out of an abundance of caution and that there is no research to indicate it makes law enforcement safer.

Robinson said there is a history that would justify concerns about radios and whether back up will get to an officer in need in time.