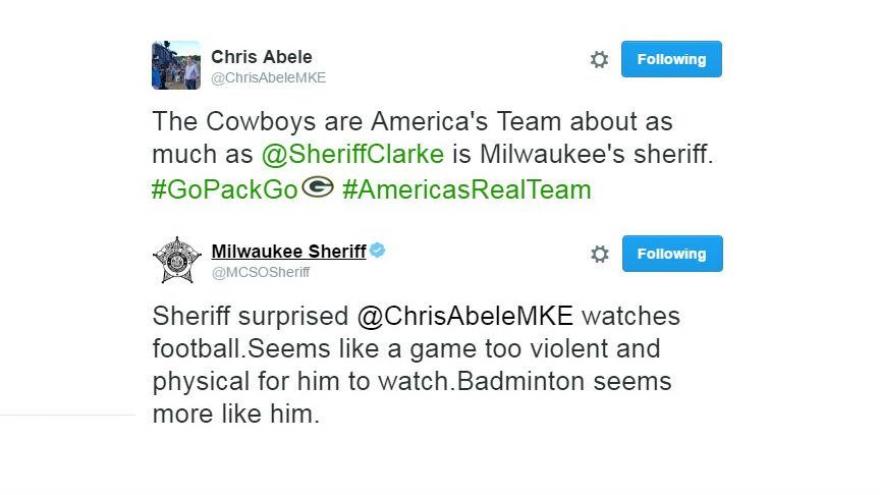 Milwaukee County Sheriff David Clarke and Milwaukee County Executive Chris Abele have been tweeting back and forth the past few days about the upcoming Packers, Cowboys game.

The Twitter feud started when NRATV tweeted a clip with Sheriff Clarke where he says the Cowboys are "physically stronger" than the Packers and would beat them. You can watch the clip at the bottom of this story.

Christ Abele then tweeted that, "The Cowboys are America's team just as much as Sheriff Clarke is Milwaukee's Sheriff."

The Cowboys are America's Team about as much as @SheriffClarke is Milwaukee's sheriff. #GoPackGo #AmericasRealTeam https://t.co/IfxIfFxuQd

The Milwaukee County Sheriff's Office Twitter account then tweeted that Sheriff Clarke was "Surprised Chris Abele watches football. Seems like a game too violent and physical for him to watch. Badminton seems more like him."

Sheriff surprised @ChrisAbeleMKE watches football.Seems like a game too violent and physical for him to watch.Badminton seems more like him.

Chris Abele has not responded to the latest tweet. The Packers play the Cowboys in Dallas on Sunday at 3:40 PM.