Scattered showers and storms have developed across most of southeast Wisconsin, but none are severe at this point. Strong storms are definitely possible with most seeing wind gusts to 40 mph. A few gusts to 50 mph along with hail are possible in a line of storms moving through Dodge County. 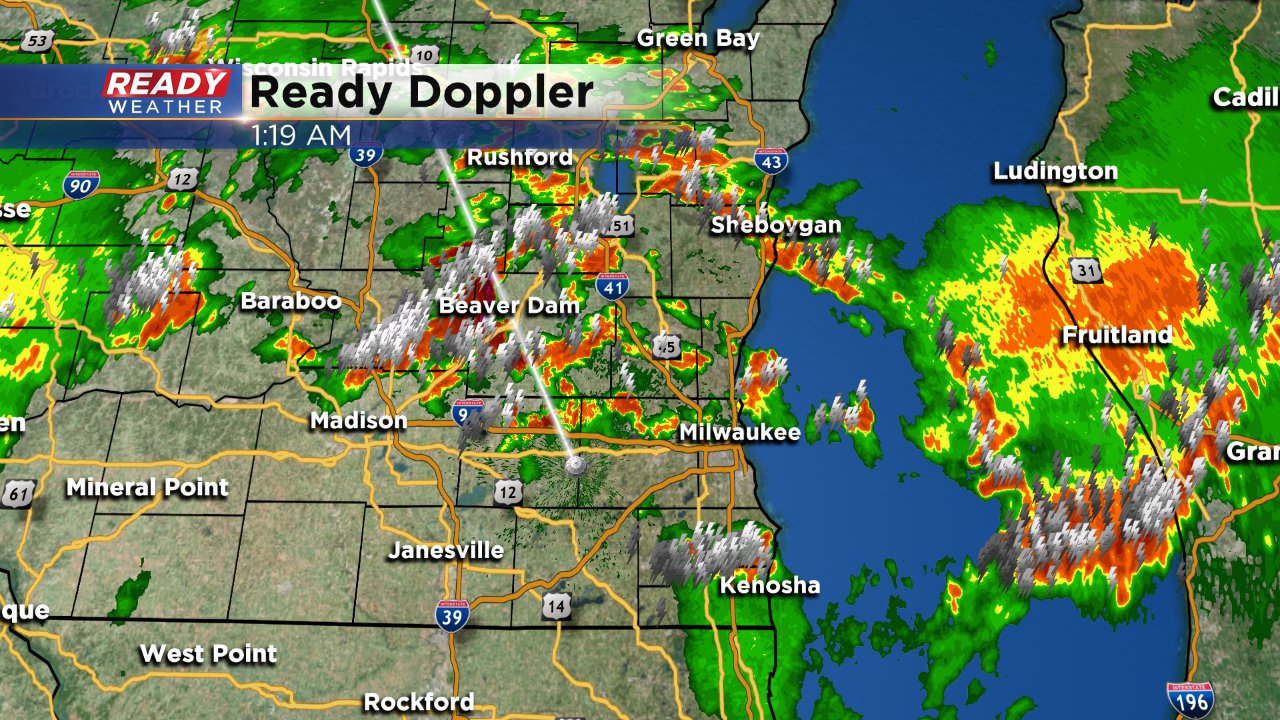 Flash flooding has been reported in Mequon where some roads are closed. Road closures have also been reported on Milwaukee's south side.

A flash flood warning has been issued for northern Milwaukee County and southern Ozaukee County where 2-4" of rain has fallen. The warning goes until 2 a.m. Monday morning. With an overly saturated ground, trees will be able to come down easier in high wind.

For the first time in two hours, there are no severe warnings in southeast Wisconsin. Heavy rain and dangerous lightning is still moving through mainly eastern communities. 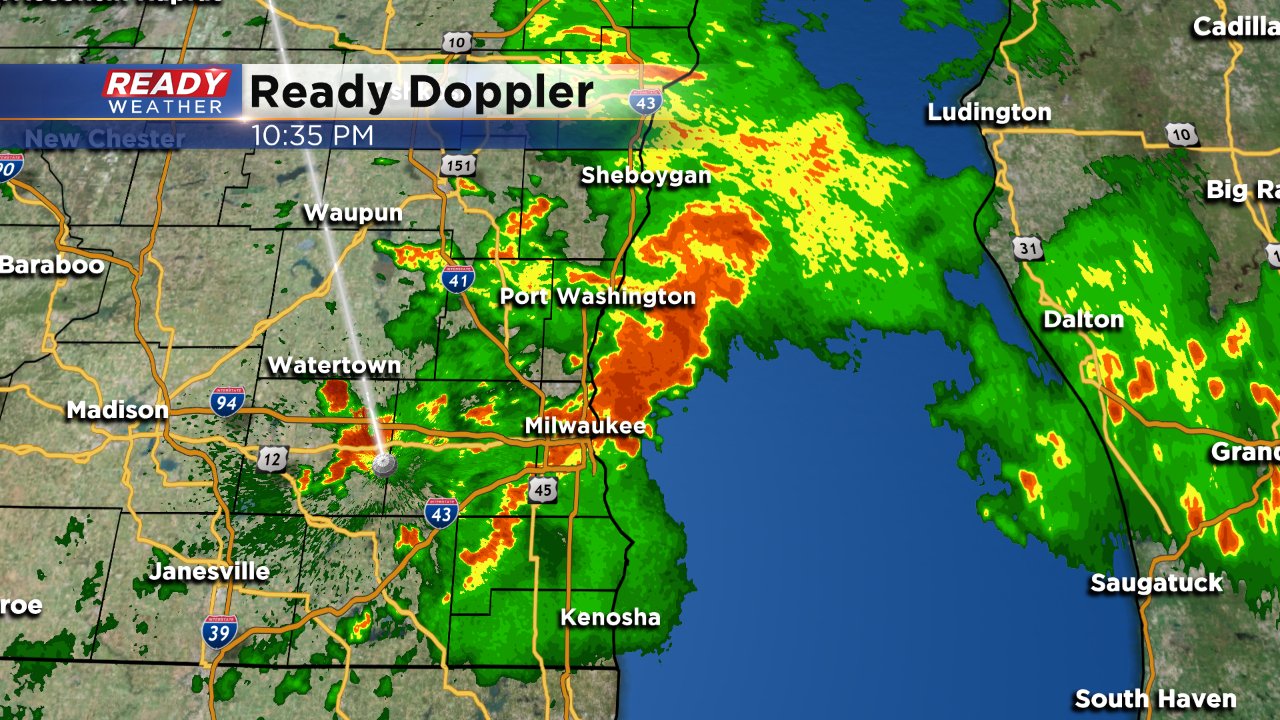 Rain totals are starting to come in and some have picked up over 1" of rain. There have been no reports of flooding yet. 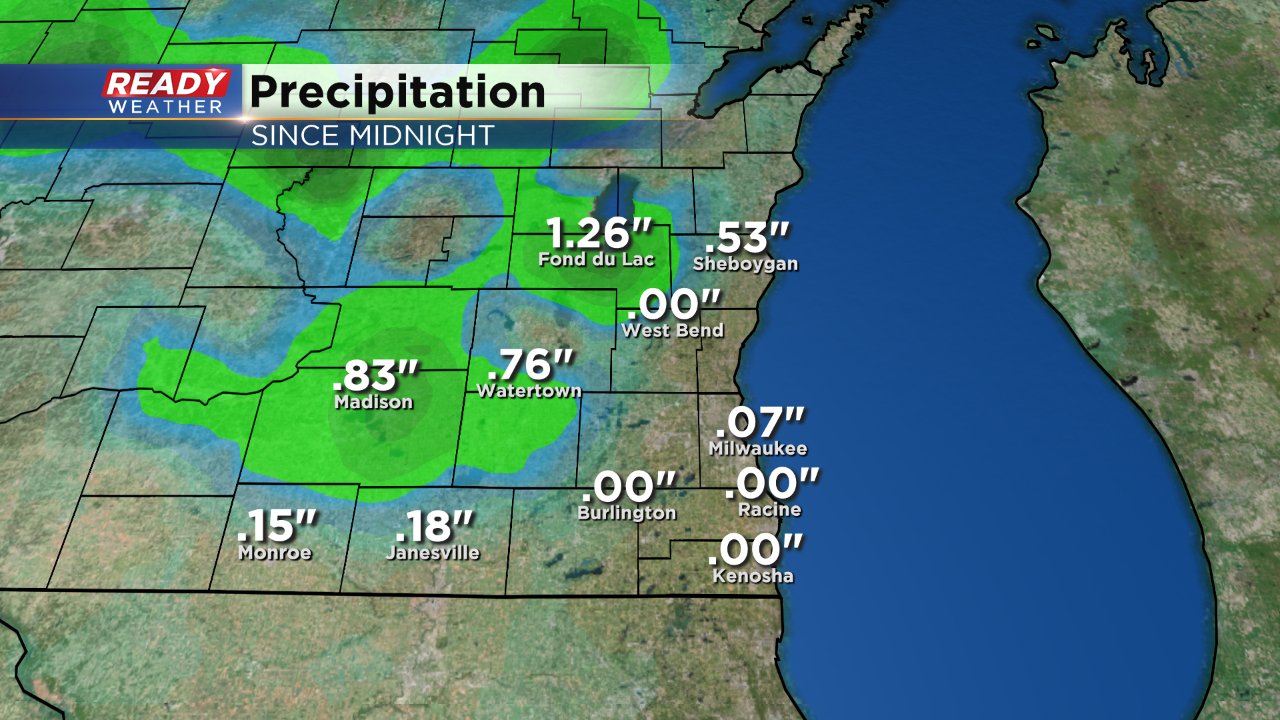 The National Weather Service has announced that they will be out in Washington County around Hartford and Jackson to survey the potential for a tornado. There have been no reports or video of the funnel, but enough damage to warrant a survey. Damage was also reported in Ozaukee County.

Severe storms are still moving through southeast Wisconsin. The latest storms have shown a hail threat along with severe winds. 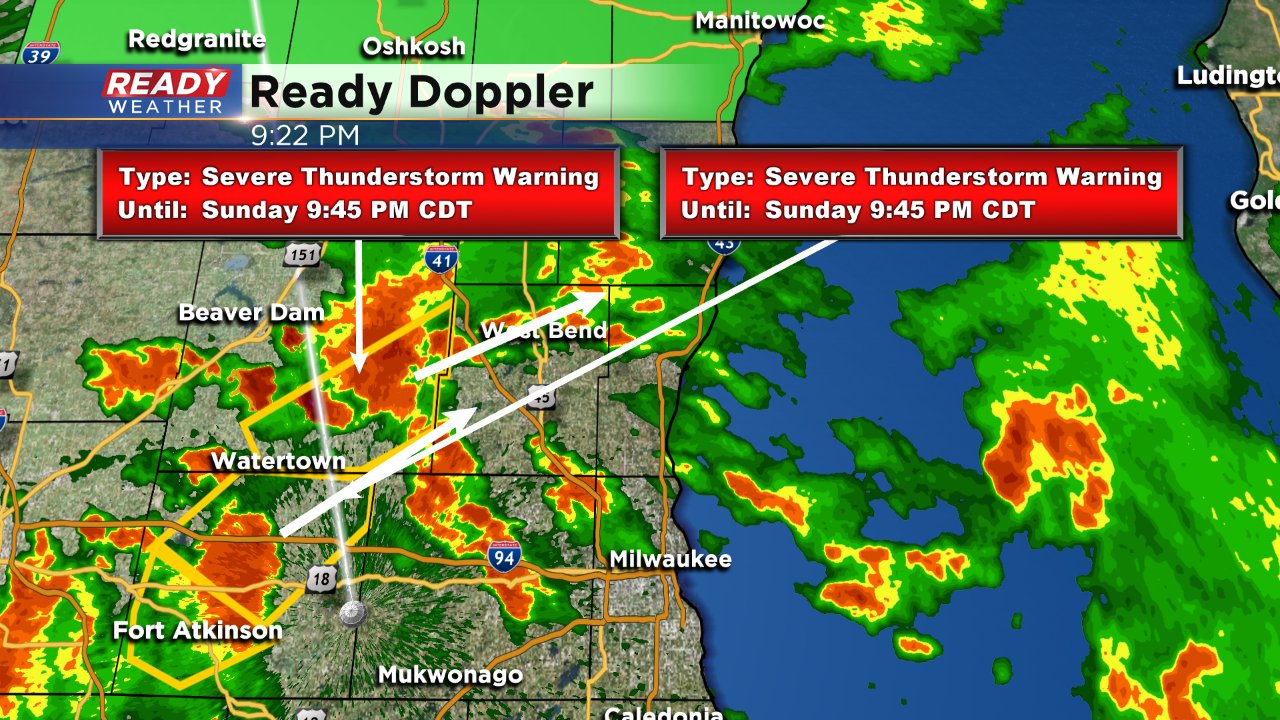 The severe thunderstorm watch has been allowed to expire for most of southeast Wisconsin.

Another round of severe storms will be possible after midnight. Readycast shows storms moving through around 2 AM. 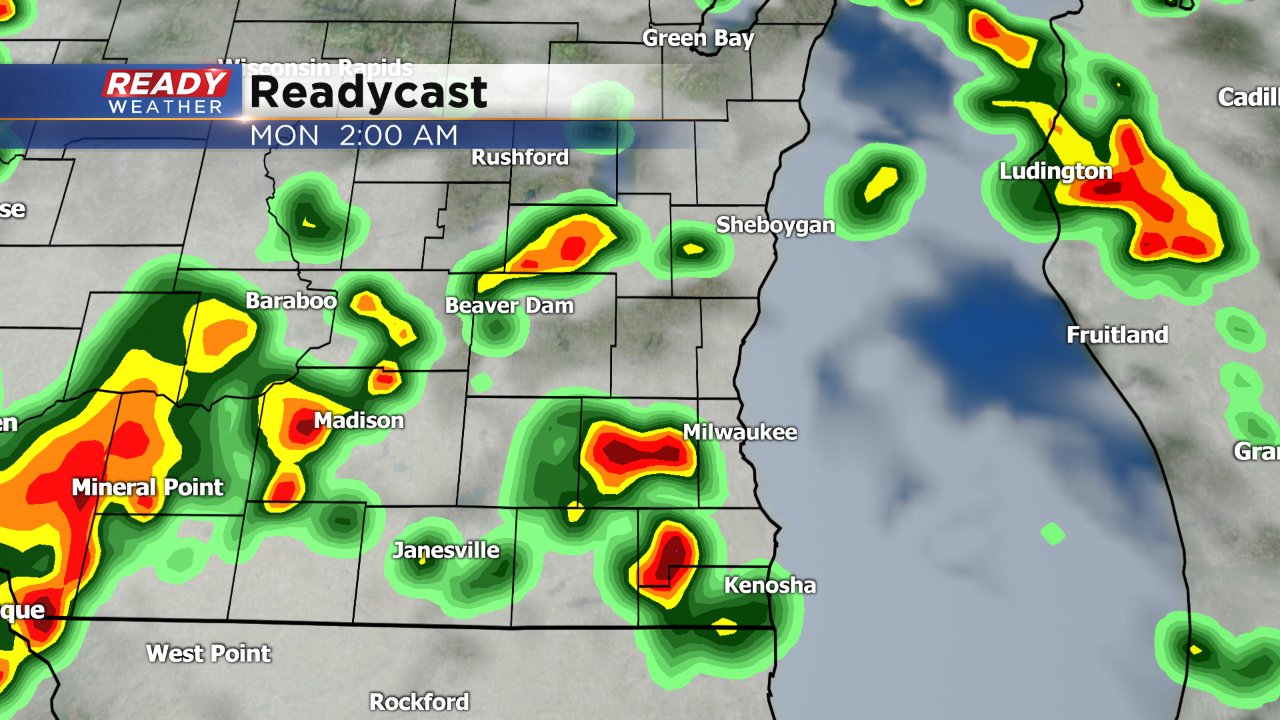 Strong to severe storms are still popping up across southeast Wisconsin. Another tornado warning has been issued for Columbia County moving towards Dodge County. We will track this storm closely. 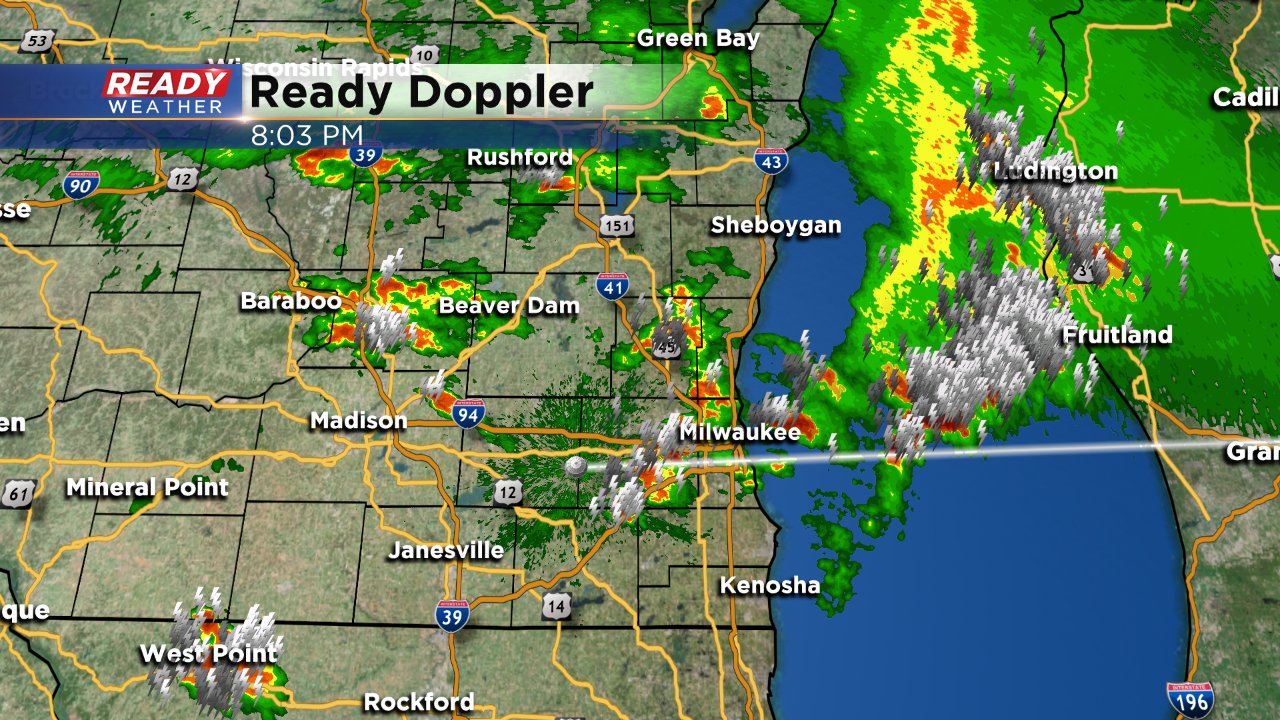 The severe thunderstorm watch has been lifted for some western and southern counties but remains in place until 9 pm for Sheboygan, Washington, Ozaukee, Waukesha and Milwaukee Counties. 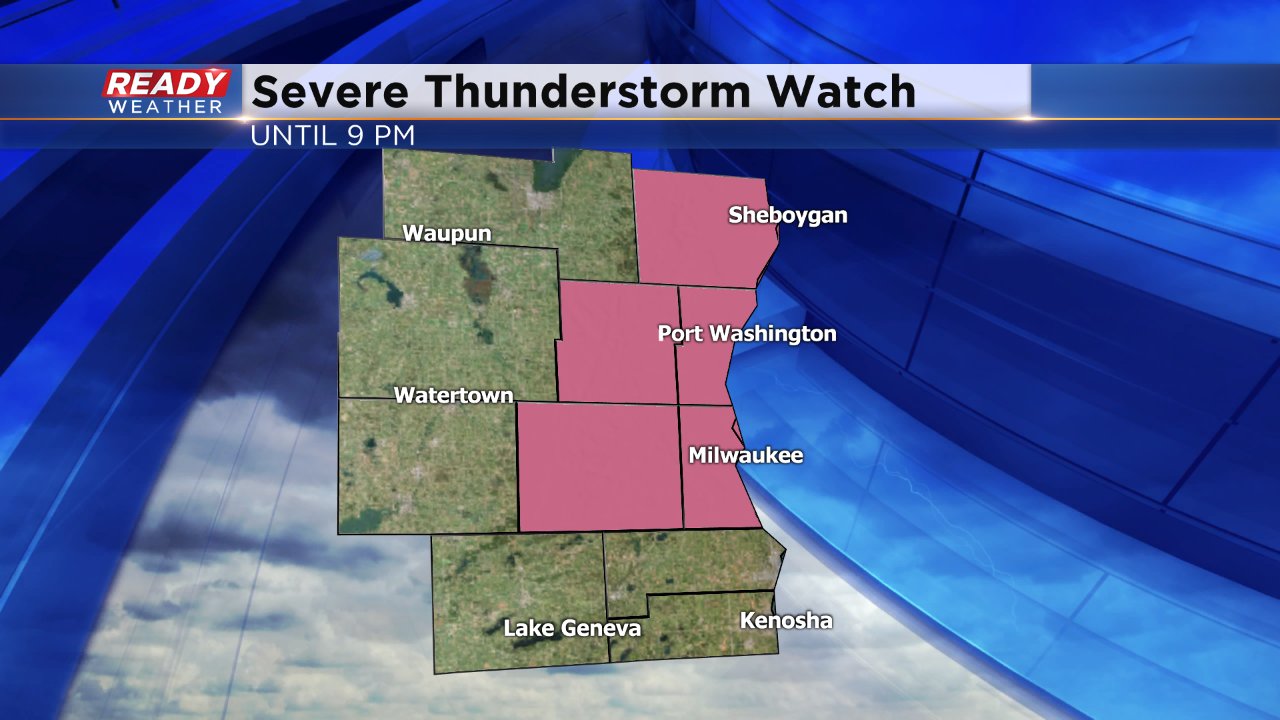 Scattered storms will be possible the rest of Sunday night.

A first wave of heavy rain and storms is exiting southeast Wisconsin. A tornado warning was briefly issued for central Washington and Ozaukee Counties where rotation was noticed just east of Jackson moving towards Cedarburg and Grafton, There were a few reports of wind damage but no tornado has been reported.

A few more rounds of severe storms may be possible the rest of Sunday evening and into Monday morning. 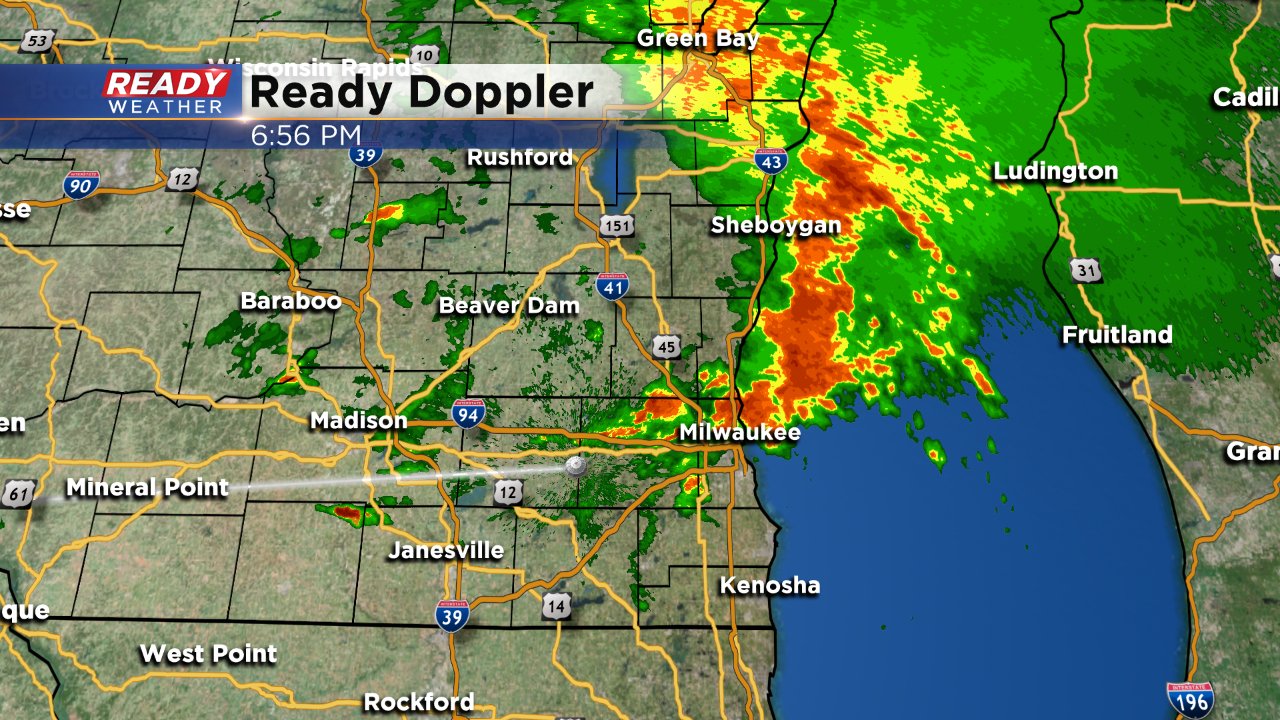 A severe thunderstorm watch has been issued for all of southeast Wisconsin until 9 pm Sunday evening.

Scattered showers and storms are likely for the rest of Sunday afternoon and evening. As of 4:30 p.m. a cluster of storms has formed just west of our local area. In addition to reports of trees down, and some smaller hail, the storms have a tremendous amount of lighting with over 500 lightning strikes reported in 15 minutes. 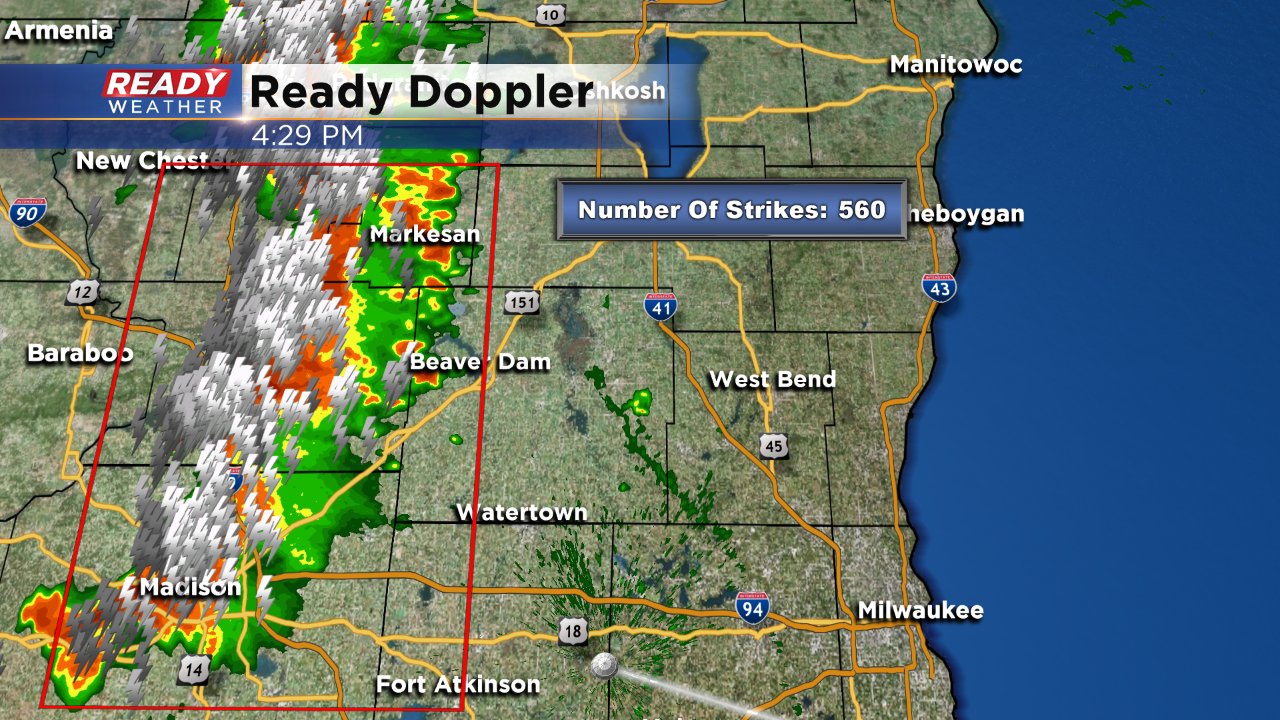 A few waves of storms will be possible on Sunday. This afternoon wave will most effect counties north of I-94, with another round arriving after 9 p.m. that would likely impact areas south of I-94. 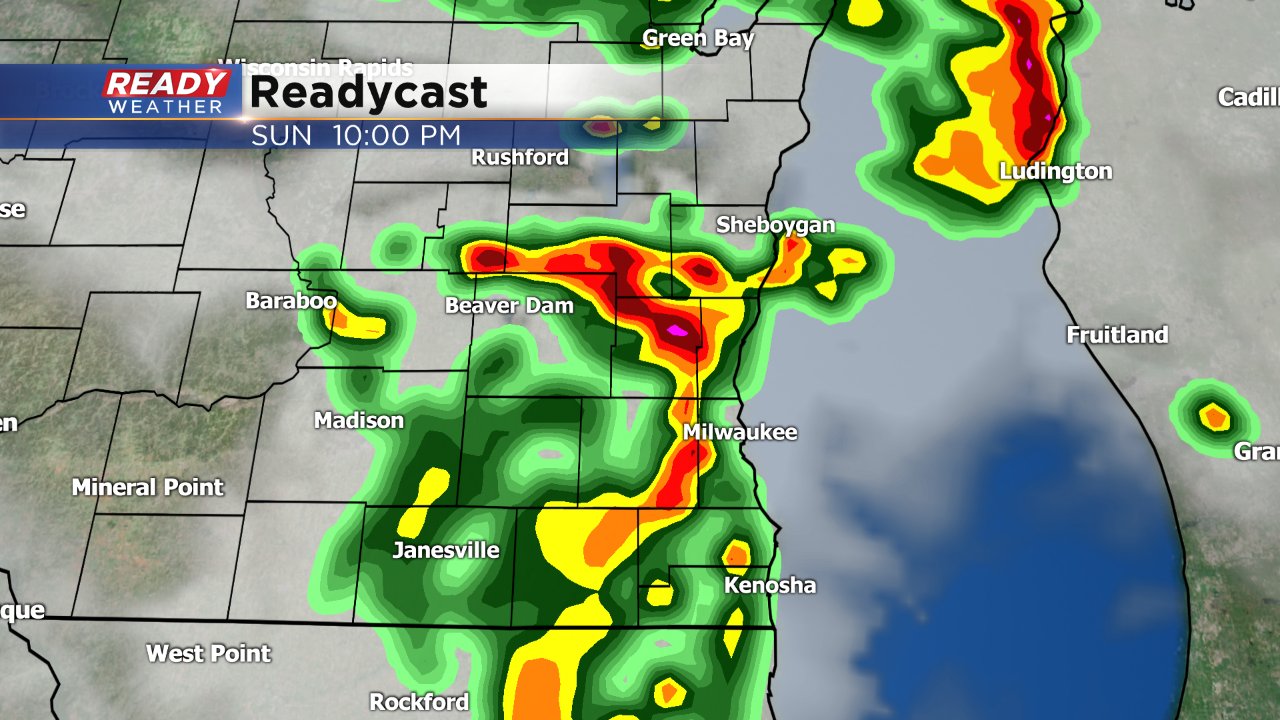 A few more scattered storms are possible during the overnight hours which could be isolated severe. 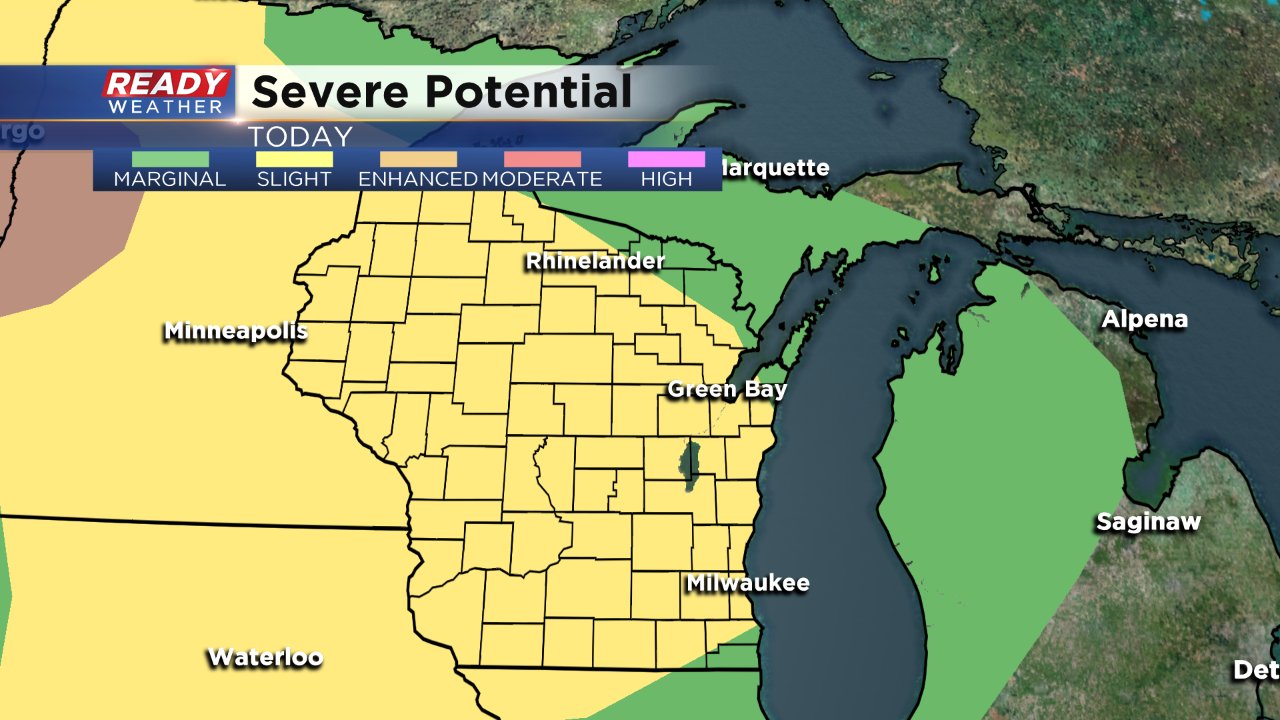 The severe risk and heavy rain risk is not confined to Sunday. Both Monday and Tuesday could also see storms with heavy rain. A marginal to slight risk for severe weather has been issued for both days. The main threats will be heavy rain, but strong wind and large hail are also possible. 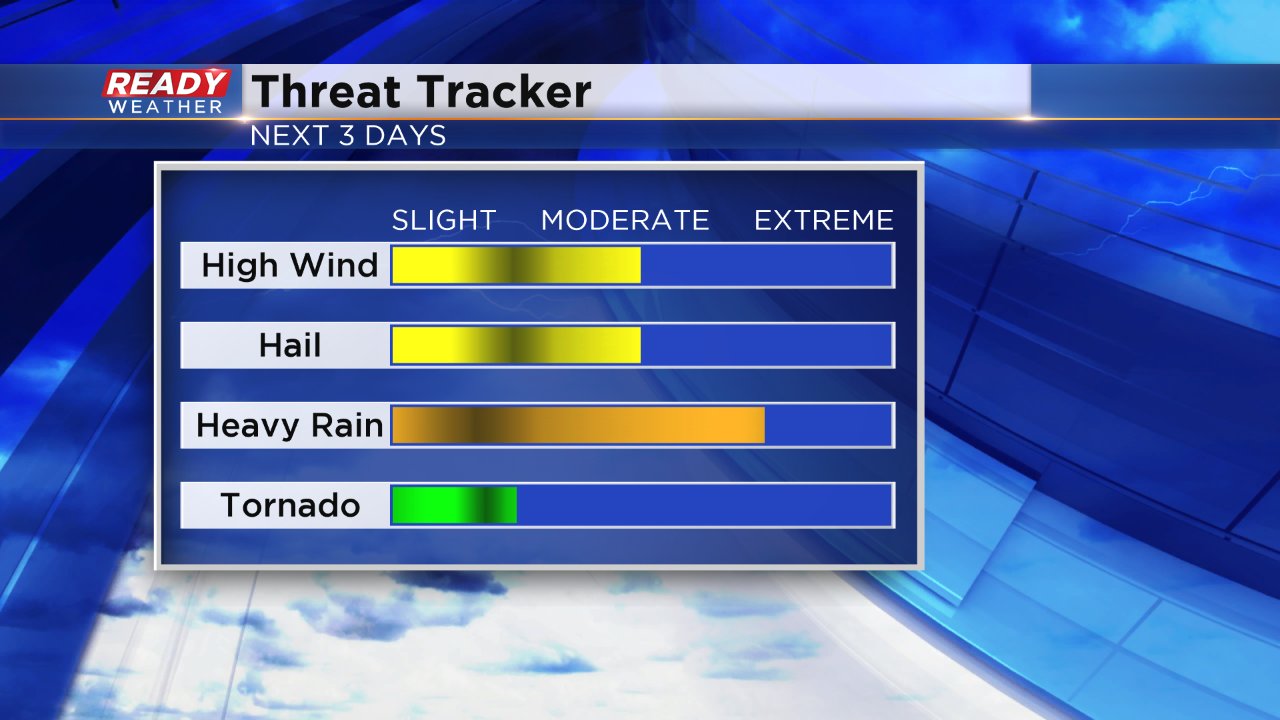 Heavy rain will definitely be a big threat, especially for areas around Madison that flooded last week. By the end of Wednesday some spots could pick up over 3" of rain.

Download the CBS 58 Ready Weather App to track the latest on radar.