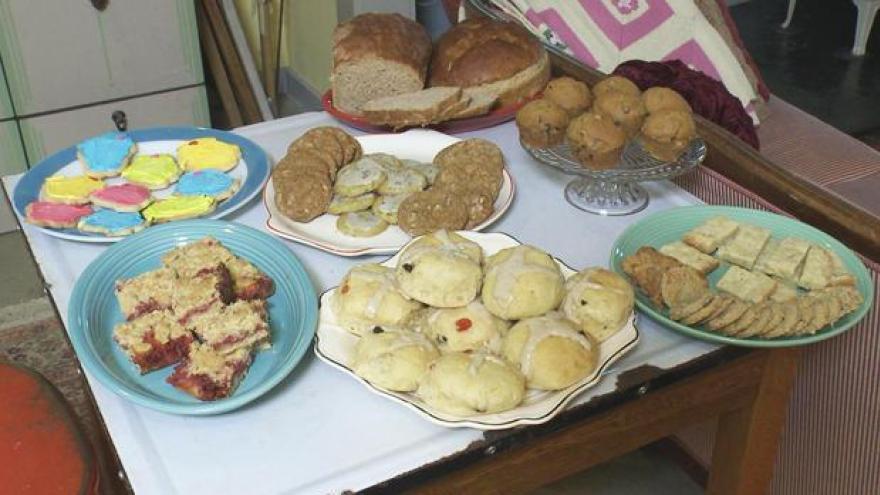 (CBSNews) In rural Blanchardville, Wisconsin, say the word “cookie” to Kriss Marion and her baking buddies, and you have the recipe for a brawl.

Reynolds said, “The critics say that this isn’t about money or it’s not about competition, it’s about health.”

Add Dela Ends, “How come it’s healthy in 48 other states? What grandma ever killed her grandchild with cookies?”

You see, Marion runs a farm featuring an assortment of goats, chickens and cows, plus a bed and breakfast, where she likes serving her guests her freshly-baked treats. And make no mistake: “treat” is the word for it. She bakes some mighty tasty cookies.

But she has a problem. Because if she sells, say, a half-dozen or so of her lavender-infused lemon sugar cookies to her guests, the State of Wisconsin says she’s broken the law, and will face up to six months in jail.

Because it turns out that Wisconsin is one of only two states (New Jersey being the other one) that ban the sale for profit of home-baked goods.

“So I’m in the presence of potential criminals here, right?” Reynolds laughed.

So, for several years now, Kriss Marion and her partners in crime -- Lisa Kivirist and Dela Ends -- have lobbied state legislators to lift the baked-goods ban.

How much money could they be making if the ban were lifted?

Their so-called “Cookie Bill” passed the Wisconsin Senate -- twice -- overwhelmingly. Still, it never came up for a vote in the Assembly. And the reason, multiple sources tell CBS News, is Assembly Speaker Robin Vos, who never scheduled a vote on the bill. Twice.

“It’s important for us to listen to our constituents and hear their voices on the budget,” said Vos, who owns a popcorn business.

He also has ties to the Wisconsin Grocers Association, which opposed the bill.

We wanted to ask Vos about what some of his constituents clearly see as a half-baked stance. But he declined repeated requests for an interview. He did offer this statement:

“As a small business owner, I appreciate the need to remove unnecessary regulations that don’t protect public safety or the environment. While it’s important that Wisconsin attracts new entrepreneurs, it should not be at the expense of our small businesses that are currently meeting the standards and regulations. The legislation that was proposed last session would have created an unequal playing field and undermine small businesses who make up nearly 98 percent of Wisconsin businesses, employing half of the workforce in our state.”

But Brandon Scholz of the Wisconsin Grocers Association did talk to us. “It’s not about muffins and it’s not about competition; it’s about public health,” he said. “We don’t want to have anybody get sick.”

Attorney Erica Smith, with the Institute for Justice, a national non-profit law firm, represents the home-bakers, who are now suing the State of Wisconsin.

“It doesn’t make sense to impose the same rules on a Hostess factory as it does a home baker,” Smith said. “All we’re talking about is people using their home kitchens and their home ovens to make a small amount of goods and sell them to their community.”

To Kriss Marion, the lawsuit is about “creating rural economic development opportunities. A market downtown on a Saturday brings people in.”

A decision in the case is expected later this spring. And if the home-bakers win their case, what then? “We start baking,” Kivirist laughed.

To which Ends added, “We’re going to have a party!”