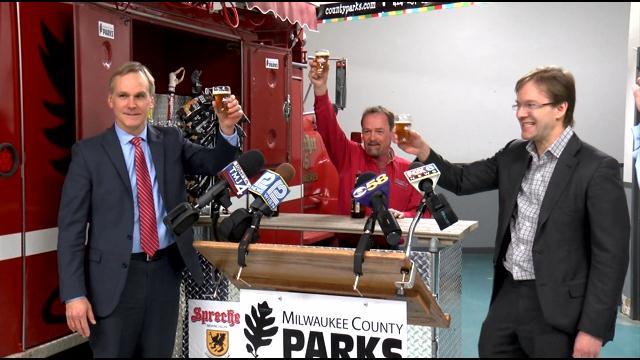 This means that two parks will have stops each week of the eight-week tour.

At least 15 parks will be on the tour.

Sprecher renovated some classic fire trucks the new addition has a great capacity.

His declaration was met with thunderous applause.

Sprecher will also be serving brats, and pretzels and other tasty treats from an ambulance.

County Executive Chris Abele began the traveling beer garden with the hopes of generating $100,000 last year. It wound up generating a quarter of a million dollars.

All the revenue the County receives from the beer gardens will go back into improving parks across Milwaukee County.

Sprecher was the first brewery to open after prohibition in Milwaukee.

To mark the occasion of bringing a new beer garden to enthusiasts, they toasted with a 10 year old Abbey Tripel.

It's a rare kind of beer that gets better with age.

They then brought out a cake and sang to Abele whose birthday is tomorrow.

Then they had more beer.

Here is the schedule, weather permitting