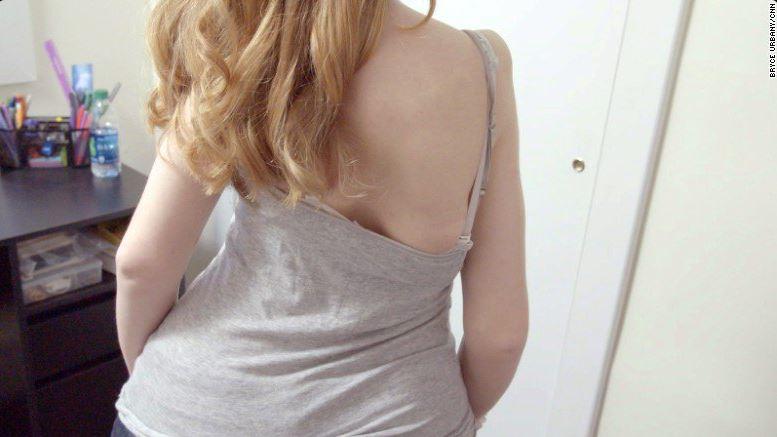 (CNN) It's impossible for those who have fibrodysplasia ossificans progressiva, or FOP, to describe what it's like to live with it.

They can tell you to imagine you're bound so tightly you can't move any of your joints -- your neck, jaw, shoulders, wrists, hips, knees and ankles all locked in position.

They can tell you to picture being frozen in a block of ice, where no one can move your limbs.

But nobody is really able to comprehend being trapped in your own body.

Jasmin Floyd has FOP. Over time, her muscles, tendons, ligaments and other connective tissues are turning to bone, forming a second skeleton. It's "one of the rarest, most disabling" genetic conditions known to medicine, according to the International FOP Association, with just 800 confirmed cases across the globe. Jasmin is one of about 285 confirmed cases recorded in the US.

"It's intimidating ... something I can't control is trying to take over my body," Jasmin says.

At 23, she's already lost the ability to reach her arms above shoulder level and to move her neck. Her close friends know to sit on her right side because she has to turn her whole body to look to the left. She struggles to pick things up due to extra bone growth on her back.

This summer, a flare-up on the right side of her face locked her jaw. She's still trying to figure out what she can eat without opening her mouth more than a centimeter.

Bone growth can be caused by trauma, a bump or a fall. Or it can be completely random. Jasmin will wake up one morning and not be able to move another joint. Each flare-up can cause debilitating pain -- over a "10" on a standard pain scale. She takes ibuprofen occasionally but "I haven't really found something (for) when I have intense pain. I've been on strong medications but sometimes it doesn't even touch the pain I have. I've gotten used to letting it do its thing."

Jasmin had a pea-sized lump on her tiny big toe when she was born. The pediatrician told her parents, John Floyd and RoJeanne Doege, it was probably nothing to worry about. When she was 9 or 10 months old she started to develop other small masses on her skull and along her spine. They went back to the pediatrician, who ventured several guesses but Jasmin seemed fine otherwise, so they moved on.

But on the way to kindergarten in the fall of 1998, Jasmin complained of a sore neck. RoJeanne thought she had slept wrong, until Jasmin's neck stiffened. The first few doctors they saw thought it was scoliosis. Lyme disease. Cancer. Torticollis. Then in January 1999, a doctor in Hartford told them Jasmin had FOP.

"The actual diagnosis simply blew us all away -- we were absolutely lost in every way," John wrote in an email from California, where he now lives. He and RoJeanne divorced in 2012.

Everyone around Jasmin became paranoid that touching her would cause new bone to grow. She was forced to wear a helmet at school until RoJeanne fought the teachers to loosen the restriction. Friends and relatives held fundraisers to help defray the cost of her care. The family started a greeting card company to occupy their time and raise awareness of the rare disease.

"She was really cheated out of what most would consider a normal childhood," John says.

Too much of a good thing

In April 2006, Dr. Frederick Kaplan and his fellow researchers at the University of Pennsylvania School of Medicine announced they had discovered the FOP gene.

"One single genetic letter out of 6 billion," Kaplan says -- 97% of FOP patients have it. By identifying the gene, scientists were able to find the protein the gene encoded -- an enzyme that basically causes a reaction that forms bone. Usually the enzyme only works when it's turned on, to fix broken bones; but in FOP patients, that on/off switch is on all the time.

"The bone that forms is perfectly normal bone," Kaplan says. "It's just too much of a good thing."

His team and others are now looking to develop drugs that block the "on" switch. Research in rare diseases is often limited. Kaplan first became interested in FOP when he saw two FOP patients in 1985. He saw how the disease robbed kids' of their childhood; it most often starts presenting symptoms before the age of 5. "I realized this was the worst orthopedic problem I had ever seen, and there was no one working on it."

Kaplan estimates FOP is misdiagnosed in 90% of patients. Many doctors don't know it exists, and diagnose patients' abnormal bone growths as tumors. Ironically, biopsying the "tumor" with a needle can cause more bone to grow -- it's trauma to the body just like a bump or fall.

You can't predict when or how the disease will progress, Kaplan says. Half of the people he has studied have died before they turn 41. Death for adults is often caused by extra bone growing around the lungs or heart, restricting movement.

California. Florida. Wisconsin. Maine. Jasmin travels as much as she can. She loves attending concerts, especially if her favorite duo, Karmin, is playing. She's found a lot of friends online who share her passion for alternative music or her struggles with a chronic illness. Or both. She loves to hug and hates when people shy away because she might be hurt.

"Sometimes I like to feel normal," she says. "'(FOP is) scary but it does motivate me to do as much as I can and live as best as I can."

When she's not traveling, she likes to conserve her energy. She watches TV with her Maine Coon cat, Prancer. She writes on her blog "One Spirit, Two Skeletons." She's trying to figure out how she can move out and capture this fleeting time of independence. But with each flare-up, she and her mom worry more about the future.

By the time she's 30, Jasmin knows she might have to rely on a wheelchair, or be housebound. Yet she remains upbeat. She's sarcastic and sassy and rarely loses her sense of humor, RoJeanne says. Jasmin's blog is full of posts about her family, friends and travels.

In an update on November 30, she wrote: "My sudden jaw flare-up was a reminder that my abilities and independence, including traveling by myself, could be taken away from me at any time because of FOP. I'm determined to continue making crazy plans, taking risks, and having the types of experiences I had this year for as long as I'm able."