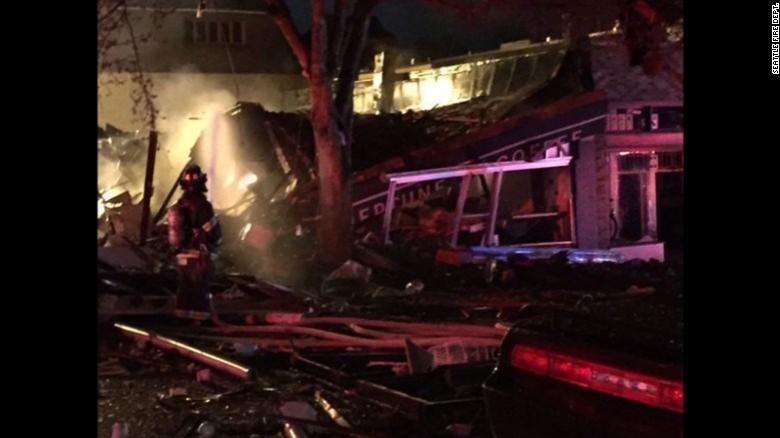 (CNN) A massive explosion ripped through Seattle early Wednesday -- obliterating at least one building, damaging several others and sending nine firefighters to a hospital in the Washington state city.

The one battalion chief and eight firefighters transported to Harborview Medical Center suffered minor injuries, said Seattle fire spokeswoman Corey Orvold. In a statement, Harborview Medical indicated that all nine were in satisfactory condition with injuries ranging from burns to cuts to abrasions.

While they recovered, their colleagues remained at the scene to address lingering flames and other issues in the city's Greenwood neighborhood. The Seattle Fire Department tweeted around 3:30 a.m (6:30 a.m. ET) that 67 personnel -- including firefighters, commanders and medics -- were on site.

It wasn't immediately known if anyone was inside the building at the epicenter of the pre-dawn blast.

Its destructive force was evident in images tweeted by the fire department showing debris stuck in trees and littering the street, as well as the shattered windows of nearby storefronts and restaurants.

Authorities didn't immediately pinpoint the cause of the explosion.

Just over six months ago, a gas leak caused a blast that injured one and brought down part of a Motel 6 in Bremerton, Washington, just across Puget Sound from Wednesday morning's blast.