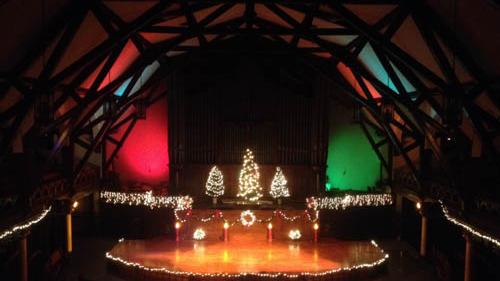 The ICHC hosts  three acclaimed performers Saturday who embrace and uphold the legacy of Tommy Makem and the Clancy Brothers while making the music their own.

Rory Makem and the Spain Brothers have taken the international stage with the vocal power of three-part harmonies, superb instrumentals and engaging stage presence.

They were featured in this year’s Milwaukee Irish Fest Tribute to Tommy Makem and will perform a special Christmas Concert this Saturday at the Historic Landmark near 20th and Wisconsin not too far from the Marquette University Campus.

The concert was recently ranked third in the top 15 holiday concerts by the Milwaukee Journal Sentinel.

Born in County Louth, Rory continues the lineage of an Irish music dynasty begun by his grandmother Sarah Makem and carried on by his father Tommy, an icon of Irish music known as the Bard of Armagh.

Mickey and Liam learned Irish songs from their father while growing up in New Hampshire. Mickey’s rich baritone voice and Liam’s mastery of stringed instruments found a home when they met Rory and combined talents.

ICHC Board Member Pete Fleming will be a special live guest on the CBS 58 News at 4 p.m. to explain how proceeds for the concert make sure the building is fully restored and continues to serve as a gathering place for various non-profits in Milwaukee both Irish and otherwise.