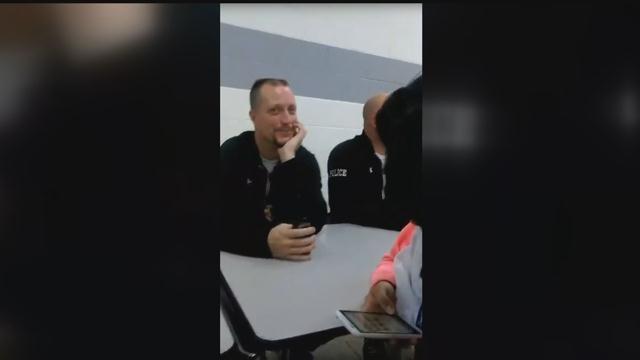 Nearly every student has a cell phone today, but do you know how they're using it at school?

This video has been viewed more than 25,000 times and its got people we spoke with wondering is this what really goes on inside Racine public schools?

The video is just over a minute long but in it, you hear a Horlick High school student repeatedly throwing insults at two Racine police officers inside the school.

"Y'all wanna take me to jail? Too bad." You can hear the student taunt the officers.

"He should be expelled. It's very disrespectful in my opinion," said mother of four Veronica Martinez.

We showed the video to people in downtown Racine who couldn't believe what they were hearing.

"Wouldn't fly when I even when went to high school there eight years ago. It's hard to watch even. Its not good," said Chris Van Koningsveld.

We asked Qurseene  Jones, "When you went to high school would it have been appropriate to talk to kids like that?"

"I wouldn't go to school just to talk about somebody, or even an officer at that. I'm there to get my education. All of that is a waste of time. I could see it if you do it with your friends but that's an officer. That's on a different level," said Isaiah Lee.

The video has since been taken down and Racine Unified says they know who this kid is and they are dealing with him.

A spokesperson said, "As soon as we became aware of the video, we took immediate and appropriate action. This type of behavior is unacceptable and is not tolerated nor does it accurately reflect the hundreds of remarkable students in our school."

"I think they need to be set down and talked to," said Jones.

While  their choice of punishment may differ.

"Taking kids out of school isn't the answer but make sure he knows he did wrong," said Van Koningsveld.

RELATED LINK: Racine Student Posts He was Suspended
The people we spoke with agree on one thing: this is bullying.

"It still can hurt adults. It can hurt anybody," said Martinez.

And hope its a lesson for parents to be more involved in their children's lives.

"I would be very upset and if I ever caught her doing that there would be consequences," said Martinez.

We reached out to Racine Police for comment and have not heard back.