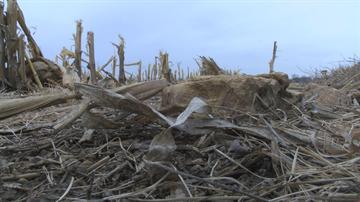 \"Out in the country, things like that don't happen much out here,\" Degner said.

When he got a call from a neighbor Saturday that someone found a woman's body in the cornfield just steps from his driveway, Degner was shocked.

\"It just kind of strikes close to home,\" Degner said.

The Jefferson County Sheriff's Office says a person was driving past the field along North Road Saturday afternoon and noticed something.  Degner says the driver is his neighbor, who didn't want to speak on camera.

Degner's neighbor told him the woman was naked and appeared to have been in the field for a while.

The sheriff's office and the state Department of Criminal Investigation worked the scene late into the night and came back Sunday.

\"That just stuns me,\" Degner said.  \"Why would someone do something like that?\"

The Milwaukee County Medical Examiner's Office conducted an autopsy Monday, but referred questions about the woman's identity back to Jefferson County.  The sheriff's office notified area agencies for any leads on missing persons, including Milwaukee Police.

\"I hope they put the person away who did it, that's for sure,\" Degner said.

The Jefferson County Sheriff's Office did not have any new information on who the woman was or where she came from as of Monday evening.  We will update this story as more information becomes available.