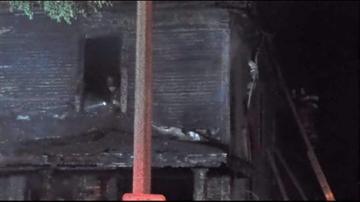 MILWAUKEE -- A family of three escaped an intense fire that consumed all two and a half stories of a home near Palmer and Burleigh streets overnight.

Officials with the Milwaukee Fire Department say two residents and a firefighter were injured in the blaze that erupted just before 2 a.m. Friday.

One adult and two children were inside. Red Cross workers on scene said an adult and child jumped out of an upper floor window to escape the fire. Both were taken to the hospital with injuries.

Flames were inside and outside of the home, now considered a total loss.

Authorities believe the fire started on the first floor, and may have started outside.