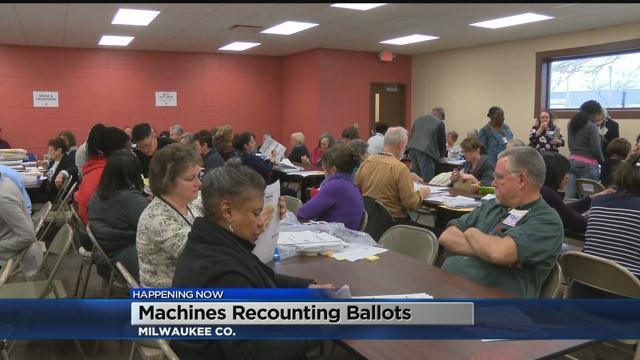 Some counties have opted to recount by hand while others are using the same machines that counted ballots the first time.

The recount is happening in this warehouse that belongs to the city of Milwaukee.

County-wide there are more than 440,000 ballots to get through and they need to be done by December 12th.

This morning a Green Party observer successfully petitioned the canvass board to publicly test every counting machine before the recount got started.

One city of Milwaukee machine was found to have a scanner issue.

Despite the late start, poll workers in Waukesha County were working make sure every single vote is recounted.

The recount process got started around noon, after poll workers went over rules and regulations for a few hours.

Workers are counting ballots by hand, with poll observers watching over them.

They started with absentee ballots this morning, and plan on recounting in-person absentee votes next and then votes that were cast on Election Day.

Officials said the late start was to ensure that staff knew every aspect of the process.

They also want to ensure voters that they're vote will be counted properly.

Workers will continue counting votes until midnight and start again tomorrow morning and in the days to come until each vote is counted.