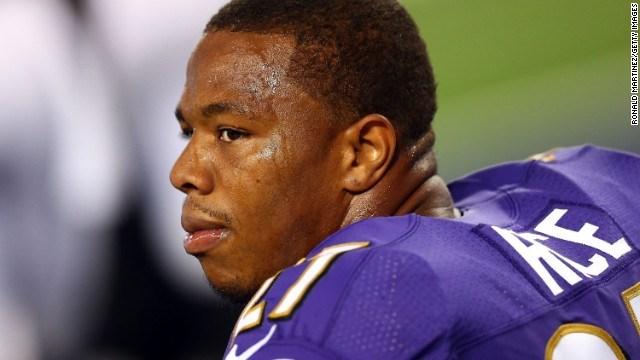 (CNN) -- Former Baltimore Ravens running back Ray Rice has won his appeal of his indefinite suspension by the NFL for violating its domestic violence policy, the players union said Friday.

\"The suspension has been vacated,\" George Atallah, the assistant executive director of external affairs for the players' union, said.

Rice issued a written statement thanking his supporters, \"most importantly, my wife Janay.\"

\"I made an inexcusable mistake and accept full responsibility for my actions,\" Rice said, referring to two disturbing videos that show him knocking out his now-wife, Janay Rice, on an elevator in a casino in Atlantic City on February 15. \"I am thankful that there was a proper appeals process in place to address this issue.\"

He said he will continue to work hard to improve himself and learn from his mistakes.

Her decision means Rice is immediately able to play but any team will have to consider the consequences of signing someone whose domestic-violence case has been so public.

\"Because Rice did not mislead the commissioner and because there were no new facts on which the commissioner could base his increased suspension, I find that the imposition of the indefinite suspension was arbitrary. I therefore vacate the second penalty imposed on Rice,\" Jones wrote in her decision.

She said the case wasn't about the number of games that Rice was suspended but the need for Goodell to be \"fair and consistent\" in its discipline.

\"Following the release of the inside-the-elevator video, which prompted a new round of criticism, the league suspended Rice indefinitely. Now, the league argues that Commissioner Goodell was justified in imposing the second discipline because Rice had misled him and because the video demonstrated a level of violence that he had not understood.

\"I have found that Rice did not mislead the commissioner. Moreover, any failure on the part of the League to understand the level of violence was not due to Rice's description of the event, but to the inadequacy of words to convey the seriousness of domestic violence. That the league did not realize the severity of the conduct without a visual record also speaks to their admitted failure in the past to sanction this type of conduct more severely.\"

In August, after outrage over Rice's initial two-game suspension, Goodell announced a new league policy for domestic violence and other assaults. First-time offenders would be suspended at least six games and a second offense would draw a lifetime ban. But he didn't alter Rice's punishment at that time.

Provisions of the initial suspension -- which include counseling, not getting in legal trouble again and not getting in trouble with the NFL again -- still stand, she wrote. The two-game suspension would have ended in September.

A spokesman for the NFL, Greg Aiello, said the league respects the decision.

It is questionable that Rice will return to the field this season.

\"If a team wanted to sign him and put him on the field that could happen but we're not expecting that to occur any time soon,\" CNN's Rachel Nichols said. \"If you're a team that needs a running back, are you going to sign Ray Rice knowing the backlash against him, knowing how people in the public feel about it?\"

Still, winning is the most important thing in the NFL, she said, and there is a possibility Rice could get a new contract if a new team thought he could help it win games.

The NFL said the league is working to implement a new personal conduct policy in the wake of the ruling.

\"Judge Jones' ruling underscores the urgency of our work to develop and implement a clear, fair and comprehensive new personal conduct policy,\" said Brian McCarthy, the NFL vice president of communications. \"We expect this policy to be completed and announced in the weeks ahead. Our focus is on consistently enforcing an improved policy going forward.\"

TMZ Sports obtained two videos from the footage taken from surveillance cameras of the altercation with Janay Rice in Atlantic City. It posted the first one, which showed Rice dragging Janay Rice -- limp and face down -- out of the elevator, shortly after the incident. The in-elevator video showing the violent punch was put online September 8, the same day Rice was released and suspended.

In a first-person piece published on ESPN.com, Janay Rice said her husband understands violence is unacceptable.

\"Ray told the truth and has fully accepted responsibility for his actions, which allowed us to work together at improving ourselves and get to the better place we are today,\" she said. She admitted she has a hard time being called a victim.

\"I know there are so many different opinions out there about me -- that I'm weak, that I'm making excuses and covering up abuse -- and that some people question my motives for staying with Ray,\" she wrote. \"However, I'm a strong woman and I come from a strong family.\"

The Rices also were interview by NBC, portions of which will be aired Monday and Tuesday.

Janay Rice told the network that she was furious at first but knew that the relationship -- she was his fiancee at the time -- wasn't over.

Rice's future not with Ravens

Rice, 27, is currently a free agent. He was a three-time Pro Bowl selection in eight seasons and played on the Baltimore Ravens' Super Bowl championship team in 2012 season.

\"We are aware of the ruling. Our owner has already stated that we will not resign him,\" the Ravens said in a statement.

In March, a grand jury indicted Ray Rice on a charge of third-degree aggravated assault, and a simple assault charge against Janay Rice was dropped. The couple were married the next day.

Ray Rice pleaded not guilty to aggravated assault and applied to a program for first-time offenders that could clear him of charges in one year.

Terry O'Neill, the president of the National Organization of Women, said the NFL needs for two things to happen: For Goodell to resign and for the league to examine thoroughly how it handles domestic violence cases.

Another women's rights group, UltraViolet, said the case is another failure of the NFL to take domestic violence seriously.

\"The problem here is the NFL's long history of sweeping abuse under the rug,\" co-founder Nita Chaudhary said.