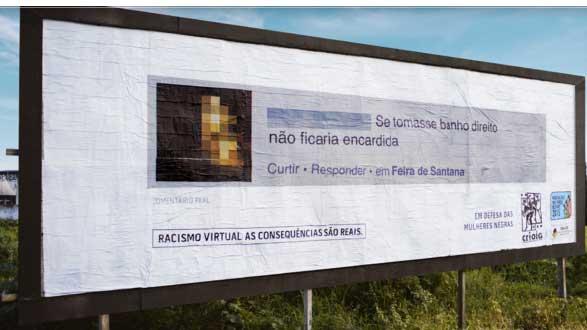 (CBS NEWS) It's time Internet trolls learned a lesson: your words cause harm.

At least, that's what the nonprofit group Criola, an organization in Brazil that works to defend black women's rights, is trying to teach social media users.

To prove their point, the group created the "Virtual Racism, Real Consequences" campaign, partnering with billboard media companies to plaster people's racist Facebook comments on signs near their homes.

The group identifies offensive remarks, locates the places where the comments were posted using geotag tools, and then displays them on billboards near those locations. The names and faces of the authors are blurred to keep their identities private.

The goal isn't to expose the offenders personally, but to raise awareness and start a discussion, an online description of the project explains.

"Does a comment on the Internet causes less damage than a direct offense?" theRacismo Virtual project asked. "For those who comment, it may be. But for those who suffer it, the prejudice is the same."

Maria Julia Coutinho, a Brazilian journalist for the prime-time TV news show Jornal Nacional, was the inspiration behind the campaign. When a photo of her was posted on the show's Facebook page, the post was flooded with racist comments.

"If she bathed properly, she wouldn't get that grimy," another wrote.

Soon, the hateful comments spread around the country -- on billboards.

The group posted a video of people's reactions to the signs around a Brazilian neighborhood on YouTube, which has already received more than 13,000 views.

"People who make comments like these should be arrested," one man said in the video. "It's an endless evil."

"It's stupidity from the close-minded people," another man agreed.

Hopefully, after seeing their words in print, people who post these kinds of comments will think twice about their actions, Racismo Virtual said: "Because, after all, the worst enemy of racism is silence."