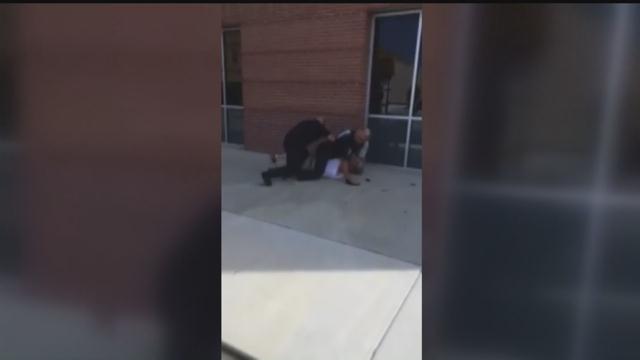 Cell phone video of Racine Police taking down a suspect by using a K-9 unit and taser has gone viral on social media, with some citizens wondering if excessive force was used. But Racine Police stand by their actions, saying they tried other methods first, but the suspect simply wouldn't listen to them.

Joshua Ammon has a lengthy criminal history and his sister admitted to CBS 58 that he's been in trouble with the law before but she thinks Racine police used excessive force when arresting her little brother.

\" I watched that video 100 times in the past two days and I believe he was handcuffed when they let the dog in to bite him,\" said Brandi Ammon, Joshua Ammon's sister.

You see Racine police take Joshua Ammon down in this cell phone video with one bite from a K-9 and a taser.

\"I counted eight times and I've never been tased before but I'm sure if the feeling was mutual I would want to move too,\" said Brandi Ammon.

\"I was appalled by the way they handled it. The way I feel if you're getting tased you're gonna bounce off the ground, you're not just gonna lay there. Your system's going crazy and they tased him eight times,\" said Brandi Ammon.

A police report shows authorities had been trying to track down Ammon for weeks when they spotted him at a store in Racine.

He had a warrant out for domestic abuse charges in Kenosha and was wanted for stalking his former girlfriend sending her threatening texts while at work like:

Abuse that his girlfriend, who refused to go on camera, fearing for her safety, said had been going on for months, saying there were times where things got physical, and she truly felt her life was being threatened.

Though court documents confirm what Ammon's former girlfriend is alleging, his sister denies the claims.

\"The things they're trying to charge him with, personally I don't think he did it. I mean he's my brother,\" said Brandi Ammon.

While he sister stands by him, his former girlfriend says the video being spread on social media doesn't show everything; that Ammon fought back the cops.

Regardless, his sister says the family will try to clear his name.

\"I love him to death whether he did right or wrong he's still my little either and in my opinion he did not deserve to be brutally beat like that,\" said Brandi Ammon.


In a press release, Racine police say Ammon continued resisting even after being tased, which is why K-9 Odin had to be used.