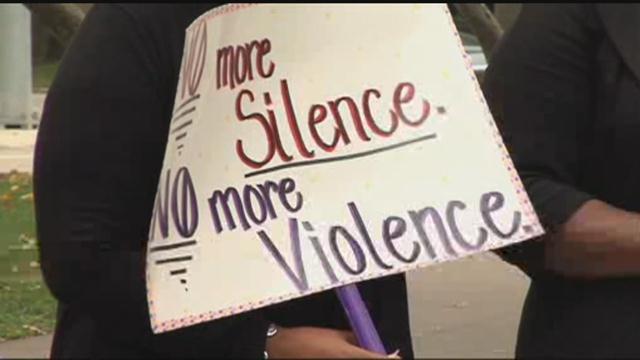 A new program hopes to force suspected domestic abusers to come forward, by publishing their names. A quick search on Facebook will show you people in Racine are sharing this list of 75 names released by police; many with comments indicating they know one of the offenders, urging them to turn themselves in.

Its exactly what Racine police want and what one shelter says will keep victims safe.

"Domestic violence across the board runs even. Doesn't matter socioeconomic status, what race you are: none of that matters. Its about 1 in 3 women and 1 in 8 men. Its a pretty rampant problem," said Katy Stephan-Cothell.

Stephan-cothell, development director of the Racine Women's Resource Center sees victims of domestic abuse  every single day and she is more than happy Racine police are making an effort to stop it.

On Monday, they released the names of 75 men and women with active domestic violence warrants in hopes the offenders or someone who knows them will turn them in.

In a statement, Lieutenant Al Days says its all an effort to hold domestic violence offenders accountable for their actions and give them a way to quickly get them through the court system; something Stephan-Cothell says will help victims immensely.

"The reality is that with victims who are in relationships or have been with the people on this list, they're already in danger. So if the person is identified on this list, and turns themselves in and helps get their legal situations cleared up, it makes it safer for the victim," she said.

And police also hope its a way to reach out to those victims and connect them with help; help Stephan-Cothell says they so desperately need because domestic violence isn't usually a one time occurrence.

"It's usually an ongoing problem. Batterers don't see their victims as a person, they see them as property. And as owner of property you can do what you want about it. Its a whole different mentality. Its more than being abusive to their partner, its the control they can exert over their partner," she said.

You can contact the Women's Resource Center, regardless of your age, sexual orientation or gender. Here is a link to their website: http://www.wrcracine.com/