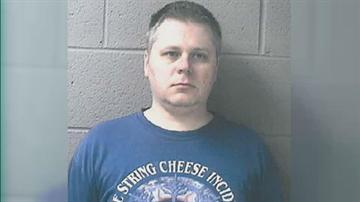 RACINE COUNTY -- February 9, 1997 two hunters near Burlington made a horrible discovery.  They found the beaten, sexually assaulted body of 14-year-old Illinois runaway Amber Creek. She had a plastic bag around her head, a bite mark on her neck and DNA left in her body.

Investigators pulled fingerprints from the plastic bag and shared the DNA across the nation, but couldn't find a match -- until now.

\"This is a day we have been waiting nearly 17 years to occur,\" Schmaling said.

Fingerprints from 36-year-old James P. Eaton were identified by lawmen in Oklahoma in February and shared with Racine County investigators.

\"Eaton had not previously been a suspect nor was he even mentioned in our investigative reports,\" Schmaling explained.

Racine County detectives watched Eaton in his hometown of Palatine, Illinois until they saw their chance to get the evidence they needed: a cigarette butt with his DNA.

Eaton was arrested and is sitting in the Racine County Jail on a $1 million bond.  He faces first-degree intentional homicide and hiding a corpse charges.  He's due to make his initial appearance Wednesday.

\"Our sense of accomplishment is tempered by the pain and the loss we know Amber's family is still going through  each and every day,\" Schmaling said.

The sheriff didn't take any questions Tuesday saying this is an ongoing investigation.  He added someone knows more about Eaton's involvement in the murder and wants them to come forward.  You can call the Racine County tip line anonymously at 888-636-9330