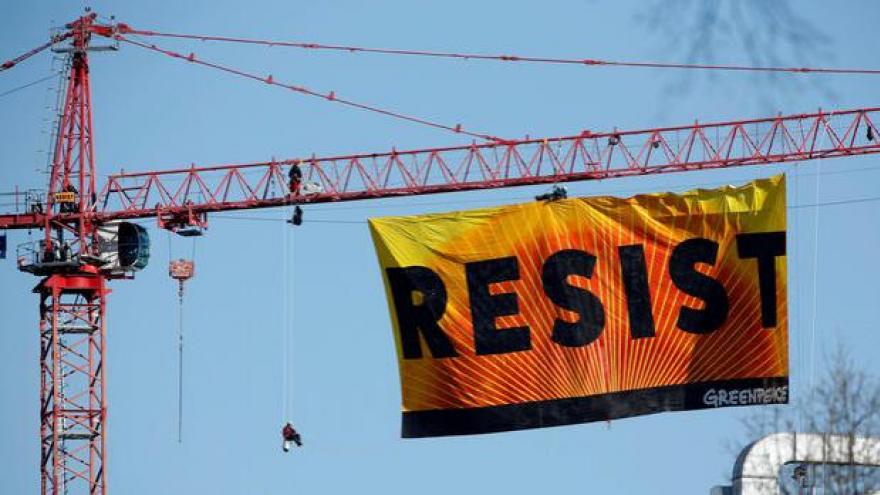 (CBSNews) WASHINGTON -- Protesters climbed a 270-foot construction site crane just blocks from the White House on Wednesday and unfurled an orange and yellow banner calling for resistance to President Trump.

Officers called to the construction site in downtown Washington found that three people had attached themselves to the crane and another four people joined them, Capt. Robert Glover of the Metropolitan Police Departmentâ€™s special operations division told reporters.

â€œTime is on our side,â€ Glover said. â€œSafety is our foremost mission this morning.â€

After a few hours, several protesters dangling from the horizontal arm of the bright orange crane opened the 70-foot by 35-foot banner that reads â€œRESIST.â€

The protesters are calling for resistance to Mr. Trump and his agenda, Greenpeace spokesman Travis Nichols said by telephone. Itâ€™s a continuation of protests that began with Mr. Trumpâ€™s inauguration. Greenpeace said in a statement that the protesters are â€œcalling for those who want to resist Trumpâ€™s attacks on environmental, social, economic, and educational justice to contribute to a better America.â€

â€œWhile we respect everyoneâ€™s right to protest, todayâ€™s actions are extremely dangerous and unlawful,â€ police said in a statement posted on Twitter.

Police would consult with prosecutors about appropriate charges, Glover told reporters. There was no continuing threat to anyone outside the site and minimal disruption to the area, he said.a