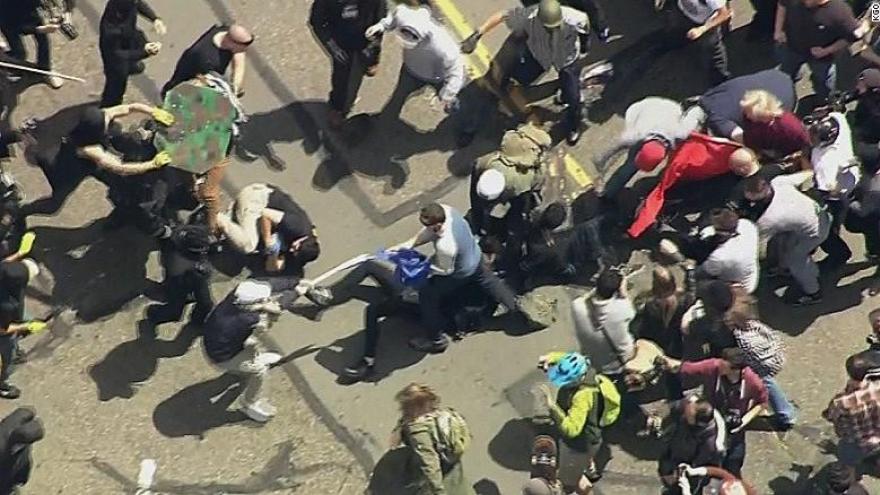 (CNN) At least 13 people were arrested as pro-Trump and anti-Trump protestors clashed Saturday at a park in Berkeley, California, police said.

"A large number of fights have occurred and numerous fireworks have been thrown in the crowds," Berkeley police said in a statement. "There have also been numerous reports of pepper spray being used in the crowd."

Hundreds of people had gathered in Civic Center Park. Police set up a barrier of orange mesh fence to separate the two sides but it quickly fell down as protesters started fighting, KPIX said.

Video showed crowds spilling into nearby streets. Scuffles broke out, fireworks, bottles and traffic cones were thrown into crowds and dumpsters and trash cans were hauled into streets. One man set afire a red "USA" hat and held it overhead.

Police donned gas masks as they used pepper spray on the crowd. A Berkeley station for BART, the mass transit system, was shut down because of the disturbance, CNN affiliate KRON said.

Video showed apparently injured people but no details on the number of injuries was available.

An even larger protest erupted in February when people took to the streets to protest an appearance by right-wing commentator Milo Yiannopoulos at UC Berkeley. The university said more than $100,000 in damage was done. In early March, 10 people were arrested when pro- and anti-Trump groups fought in Berkeley.

Protests were held in dozens of cities across the United States on Saturday for the anti-Trump "Tax Day," but the Berkeley rally was about free speech, according to local news reports.