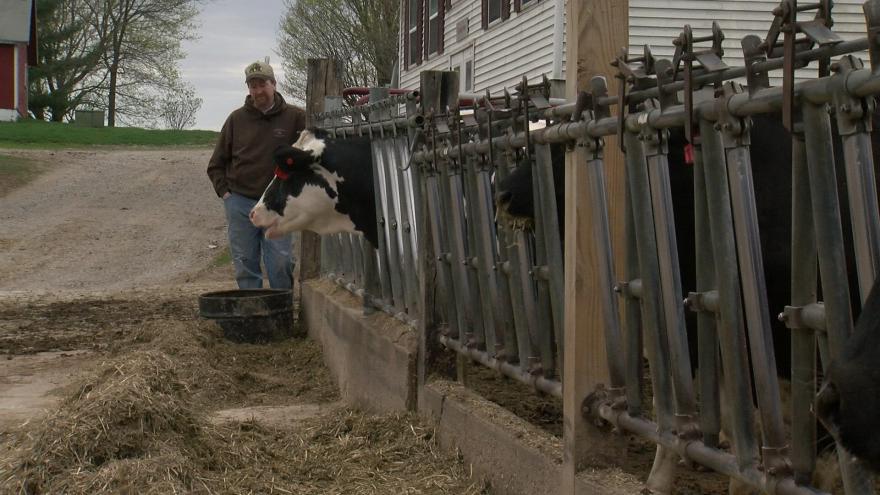 During his visit to Kenosha President Donald Trump spoke briefly about a big problem for some Wisconsin dairy farmers: the fact they can't find buyers for their milk as demand shifts in Canada.

Dodge County is being called \"ground zero\" for the issue. CBS 58 New's Jacob Kittilstad went to one Watertown farm that is at risk of losing it all.

The owners of T and R Dairy Farm said that they are happy President Trump addressed the issue in such a high profile manner. That said, there still do not appear to be any short-term solutions.

There's nearly 200 cows here at the farm. Their milk is picked up by Grassland Dairy Products. But those pickups are ending in April. Without a buyer/processor for the milk the farm might have to start selling its cows.

\"We've got families, genetic families. All our cows down there go back probably 30 years, to my dad's herd,\" Ralph Peirick said.

\"We need to get some processors to take five farms. You know, if anybody can take five farms it will help us out because it was fifty-some farms that were affected down here,\" Tony Peirick said.

The brothers say they missed President Trump's statements in Kenosha because they were working. But they understand that the president related the issue to bad trade deals.

\"Because in Canada some very unfair things have happened to our dairy farmers and others and we're going to start working on that with Ron [Johnson] and with Scott [Walker] and with Paul [Ryan] and with all of your representatives. What's happened to you is very very unfair. It's another typical one-sided deal against the United States,\" President Trump said.

President Trump said the issue may be related to NAFTA. But policy analysts say that dairy trade deals are not included in that agreement with Canada.

But these farmers don't think that trade is the main issue.

\"I don't blame Canada. You know, we were shipping milk up to Canada and they've got their producers up there too. Why should we overload them with milk? This ultra-filtered milk, they didn't have a way to make it and that's what they were looking for...but I don't blame Canada,\" Tony Peirick said

\"Yeah, it's been tough,\" Ralph Peirick said. \"I see my daughter. And I even got two grandkids. We both got grandkids. And there's no way. We'll find a way...somehow. I think processors will step up and help.\"

The owners of T and R Dairy Farms LLC say that if a solution isn't figured out and a processor for the milk isn't found, They will have to start dumping their milk starting on May 1.