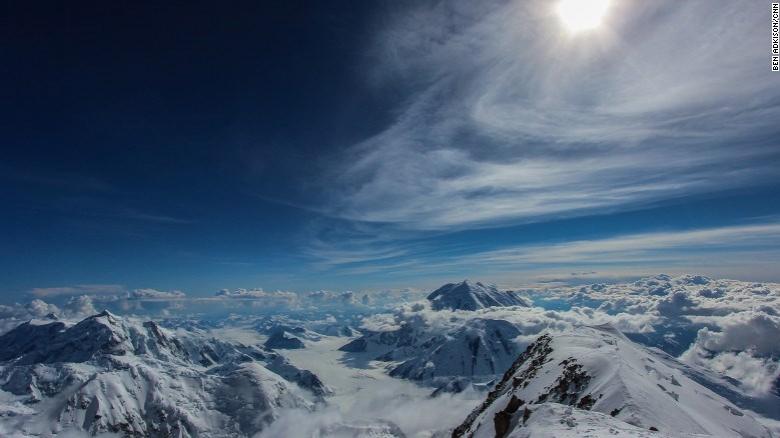 (CNN) To hear the White House describe Alaska, the state has become the canary in the climate change coal mine, complete with raging wildfires, accelerating ice melt in the arctic, vanishing glaciers and whole villages forced to relocate away from rising seas.

President Barack Obama will carry that urgent message to Alaska this week in the hopes his long journey away from his busy agenda in Washington will begin to change the national conversation on global warming.

His first step while he's there: officially renaming the country's tallest mountain from Mt. McKinley to Denali, an historic nod to the region's native population, which the White House says is under threat from the already-present threat of climate change.

\"This is all real. This is happening to our fellow Americans right now,\" Obama said in his weekly address Saturday.

All week long, Obama will try to call attention to Alaska as a kind of climate change ground zero. Whether it's a hike on a melting glacier near the town of Seward or his visit with fisherman in the remote coastal village of Dillingham, the President wants a distracted public to see the jarring effects of global warming through his own eyes.

To maximize the impact of the historic trip, which will make Obama the first sitting U.S. president to visit the arctic, the White House plans to devote all of the resources of its potent social media operation.

It's also using the trip to formalize the Denali name change, which native Alaskans have sought for decades. Named McKinley in 1896, shortly after President William McKinley was nominated as a candidate for office, the 20,320-foot peak has long been known locally as Denali, its name in the indigenous Athabascan language.

The national park that surrounds the mountain was named Denali in 1980, but the peak itself is still listed in official federal documents as McKinley. Past attempts to make the change were blocked by lawmakers from McKinley's home state of Ohio.

Obama is set to meet Monday with members of the native population to discuss ways the federal government can help them prepare for the effects of a changing climate, which the White House says include interrupted winter hunting seasons, newly hostile conditions for fish and wildlife and seawater encroaching on long-settled territory.

\"The issue of climate change is not an issue of the future tense in Alaska, it is affecting people's lives and their livelihoods in real ways,\" White House senior adviser Brian Deese said in a preview of the three-day trip.

During a conference call with reporters, Deese laid out the administration's latest data on the climate challenges facing Alaskans.

The arctic has warmed almost twice as fast as the rest of the world and portions of northern Alaska have lost a \"football field's worth of land a day to coast erosions and sea-level rise,\" Deese said.

Wildfires have scorched \"5 million acres of land, which is approximately the size of my home state of Massachusetts,\" he added.

Obama will deliver remarks at a conference of arctic nations in Anchorage to foreign ministers representing counties with a vested interest in the region. Secretary of State John Kerry, Interior Secretary Sally Jewell and other top administration officials are also making the 4,000-mile plus journey for the gathering.

The foreign policy implications of a changing arctic are quickly coming into focus for the Obama administration, as Russia is increasingly behaving like a military rival in the area.

The Center for Strategic and International Studies, a Washington think-tank recently warned Moscow is boosting its military presence in the arctic, dubbing the Russian ambitions as \"the ice curtain.\"

The rapid ice melt in the Arctic is more than just a military concern. There are also vital economic considerations, as the evolving climate is opening up new shipping opportunities over the top of the world for counties from China to Scandinavia.

But for fishermen who have relied on the predictability of Alaska's frigid temperatures for generations, the stakes are much higher. As the President noted in his weekly address, the state's independent governor warns four Alaskan villages are in \"imminent danger\" and must be relocated.

\"Think about that. If another country threatened to wipe out an American town, we'd do everything in our power to protect ourselves,\" Obama said in the address. \"Climate change poses the same threat, right now.\"

Even though environmentalists welcome the President's focus, some conservationists have accused Obama of climate hypocrisy, citing the recent approval for Royal Dutch Shell to begin oil and gas drilling in the Chukchi Sea off of Alaska's northwest coast. Also of concern to climate change activists is the administration's looming decision on the Keystone XL pipeline.

\"Climate leaders don't drill in the arctic,\" tweeted the progressive group, Credo. The tweet featured a rendering of Obama wearing a Shell oil patch on his chest and standing on an aircraft carrier with a banner reading \"Mission Accomplished,\" a reference to the image of President George W. Bush during the Iraq War.

The President defended the decision in favor of Shell's application as part of a balanced energy approach which he describes as the development of domestic resources of oil and natural gas until more sustainable, alternative fuel sources become the norm.

\"I share people's concerns about offshore drilling. I remember the BP spill in the Gulf of Mexico all too well,\" Obama said in his weekly address. \"That's precisely why my administration has worked to make sure that our oil exploration conducted under these leases is done at the highest standards possible.\"

One White House official dubbed the journey to Alaska a \"signature\" trip of the Obama presidency, noting climate change will come to be seen as a top priority in the administration's \"fourth quarter.\"

Just last week, Obama paid visits to Nevada to discuss initiatives to expand solar power and New Orleans where he marked the 10th anniversary of Hurricane Katrina and warned about the effects of severe weather.

Later this year, Obama will return to the issue of global warming when he meets with Pope Francis in September and again at a climate conference in Paris in December.