There were calls for Pres. Trump not to visit Kenosha because it could cause division, but he was there Tuesday, Sept. 1, to tour damage. He came with money to rebuild a city that has been decimated by riots.

Tensions were still high when Pres. Trump entered Kenosha to a mixture of cheers and boos. Pres. Trump condemned the destruction of property in the city.

.@realDonaldTrump motorcade starting to come through in Kenosha pic.twitter.com/lS9ubl6xyg

"These are not acts of protest but really domestic terror," Pres. Trump said.

Pres. Trump spoke with business owners like Scott Carpenter, who told his mother the family furniture store would be burned to the ground in real time.

"It’s going down, and she was like, 'is there anything we can do?' And she said we can’t do anything. We can’t even get to it if we wanted to. It took approximately about an hour before the fire department could get there. Getting past the rioters," said Carpenter.

Pres. Trump announced the federal government will give Kenosha businesses like Carpenter's $4 million to rebuild, as well as $1 million for city law enforcement, and $42 million statewide for public safety.

“We’re here to show our support for Kenosha, and Wisconsin. The State of Wisconsin has been very good to me. I love the people," Pres. Trump said. "We’ve done a lot for this state, and we will continue to do a lot for the state. We’re all in this together, and this is an example of what can happen when you do it right.”

The visit included a check-in on the National Guard amid false claims that he brought troops to Kenosha.

Trump also attended a public safety roundtable where he repeatedly defended police in the wake of the Jacob Blake shooting.

"Law enforcement has done such a great job working with the National Guard," Pres. Trumps said.

Kenosha Mayor John Antaramian and Kenosha County Executive Jim Kreuser were not. Both urged Pres. Trump to postpone his visit. 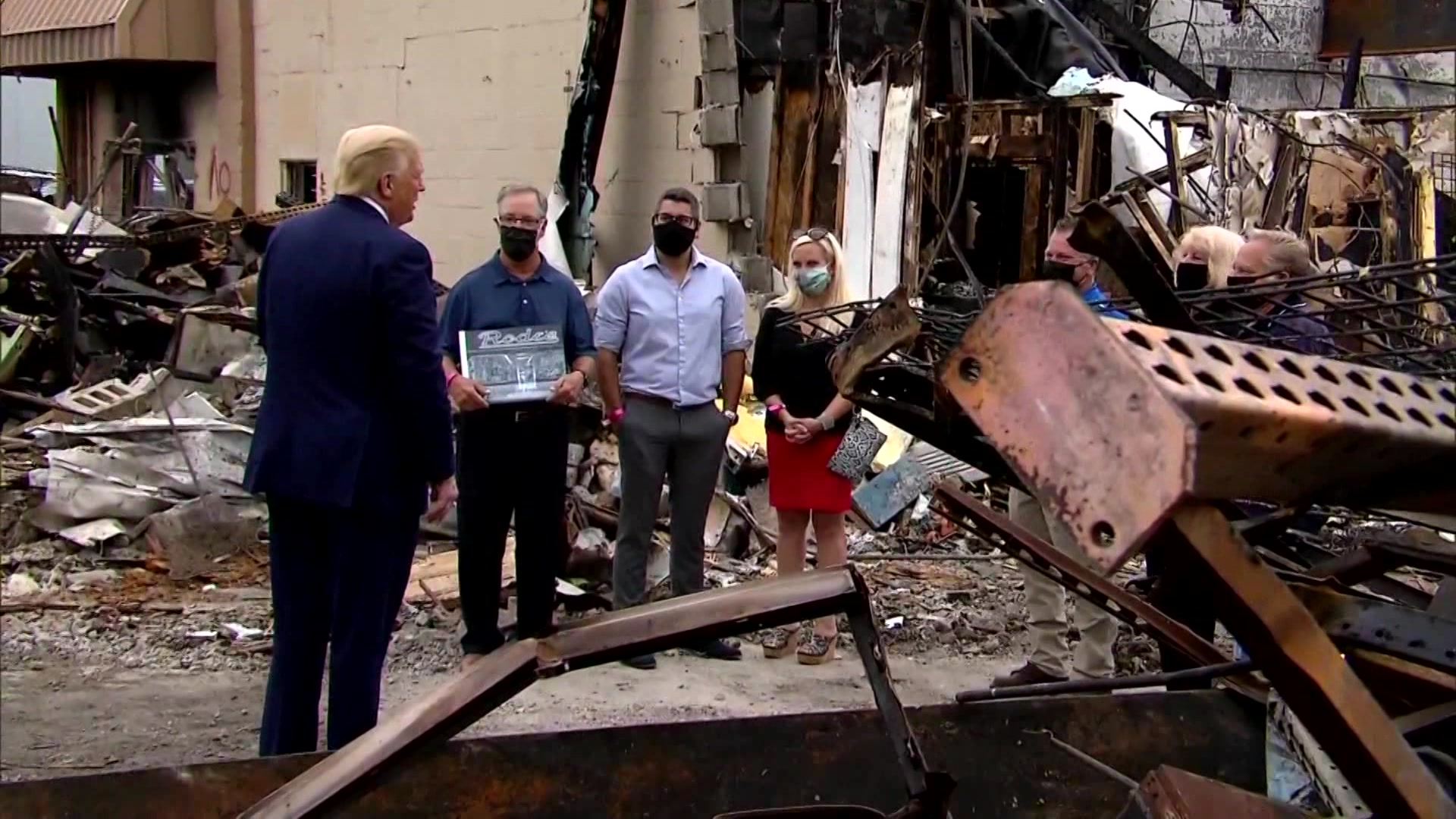 KENOSHA, Wis. (CBS 58) -- President Donald Trump will be in Kenosha Tuesday, Sept. 1, to survey damage and meet with law enforcement in the aftermath of the police shooting of Jacob Blake.

Police roping off high damage areas @realDonaldTrump will be touring in Kenosha today. Most of the people lining the route are supporters, but there are a few anti-Trump signs in the mix pic.twitter.com/lVOXXIm4gt

In addition to looking at all the property damage, Pres. Trump will be touring the Kenosha County Emergency Management Operations Center, and participating in a community safety round table. Pres. Trump will also check in with the National Guard.

He did send additional resources to the city after a public feud with Gov. Tony Evers.

Pres. Trump supporters were out with signs awaiting his arrival.

Supporters of President Trump are lining up near the justice center in Kenosha ahead of @realDonaldTrump visit later today #Kenosha#JacobBlakepic.twitter.com/TFUjWaDlIg

Special Assistant to Pres. Trump, John Horstman tells CBS 58, the message of the day is "law and order."

"He wants to make sure that the streets are safe and secure for community members and families, so they can go back and live their normal lives. Peaceful protests are OK, they’re part of the first amendment. They’re perfectly OK. But when those protests turn violent, when there is looting, when there is destruction of property, when there is violence, that’s when the federal government, President Trump will step in," said Horstman.

Follow CBS 58 on air and online for updates on this story.