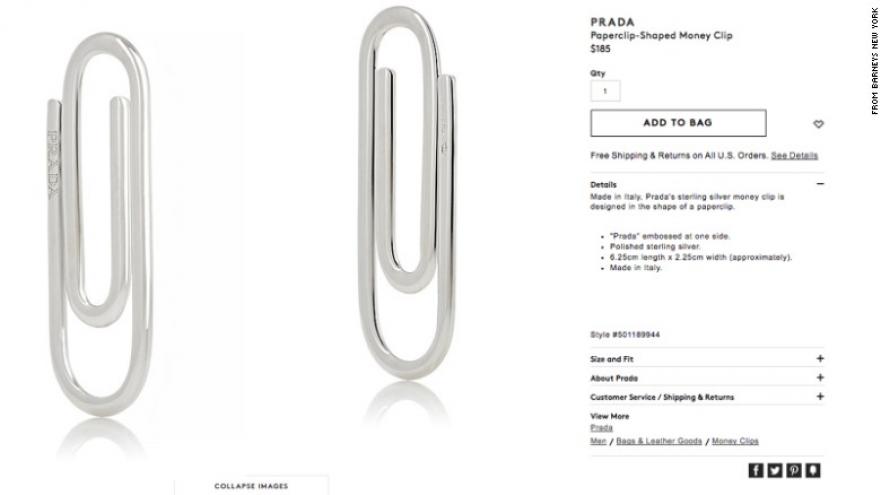 (CNN) With a spare $185 laying around and a serious lack of creativity, anyone can waltz into Office Depot and drop some cash on 13,300 paper clips.

For anyone who doesn't want to saunter into work and make it rain paper clips like the patron saint of office supplies, you can spend that same money on just one.

Prada created a sterling silver "paperclip-shaped" money clip, which Barney's is selling for $185. At 6.25 centimeters long and 2.25 centimeters wide, Prada's magnum opus clocks in at just over $13 per square centimeter.

"$185 for a paperclip? This thing better be able to hold my life together," one user tweeted.

The clip is really only useful if you regularly carry at least $186 in cash. As another Twitter user noted, "By the time I buy the paperclip, there won't be enough for it to hold."

If your need to treat yourself is limited by your budget, Barney's sells two variations for $150.

The Prada paper clip is just the latest addition to a long line of unnecessarily expensive items from elite designers.

Balenciaga's $2,145 tote bag seems to be an obvious take on Ikea's famous nylon totes. But the French house isn't the first to riff on well-known, lower-priced designs.

A blue tote bag from Balenciaga went on sale earlier this year for $2,145 -- over 2,145 times the cost of Ikea's original 99-cent bag that looked strikingly similar. And in December, Nordstromsold out of a leather-wrapped rock -- literally a rock -- priced at $85.

But if you're still planning to blow your paycheck on the clip, don't fret: "Prada" is engraved on one side, so no one will mistake the $185 investment for its one-cent counterpart.