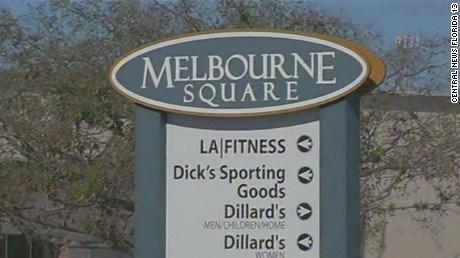 (CNN) -- A second person has died after a shooting Saturday in the food court of a central Florida mall, Melbourne police said.

A third person injured in the shooting at the Melbourne Square Mall was in stable condition at a local hospital.

One of the casualties is believed to be the alleged shooter, Melbourne police Cmdr. Vince Pryce said, though he did not make clear whether the suspect was one of the dead. The motive is unclear.

\"We were right there,\" Donna Evans told CNN affiliate Central Florida News 13. \"We were right in the line of it. God is on my shoulder, whether people believe it or not.\"

Evans said she was carrying a food order when the shots rang out.

\"It was a frightening experience,\" she told the station. \"It's something that you don't ever want anybody to experience. It was crazy. We had just gotten our food to sit down by Starbucks and Chick-fil-A and all of sudden you hear pop, pop, pop, pop, pop, pop.\"

\"I figured somebody was shooting somebody, she said. \"It's going on all the time now.\"

The \"situation is contained\" and the mall was closed, Pryce said.

\"Officers quickly identified the threat and contained the situation,\" police said in a statement. \"Officers conducted a store-to-store search of the Mall for additional suspects, injured, witnesses and conducted an evacuation. No additional threats were located.\"

The wounded victim was cooperating in the investigation, according to the statement.

A witness told WESH that two people were injured before the gunman shot himself. That account could not be immediately confirmed. One of the wounded died later at a hospital, police said.