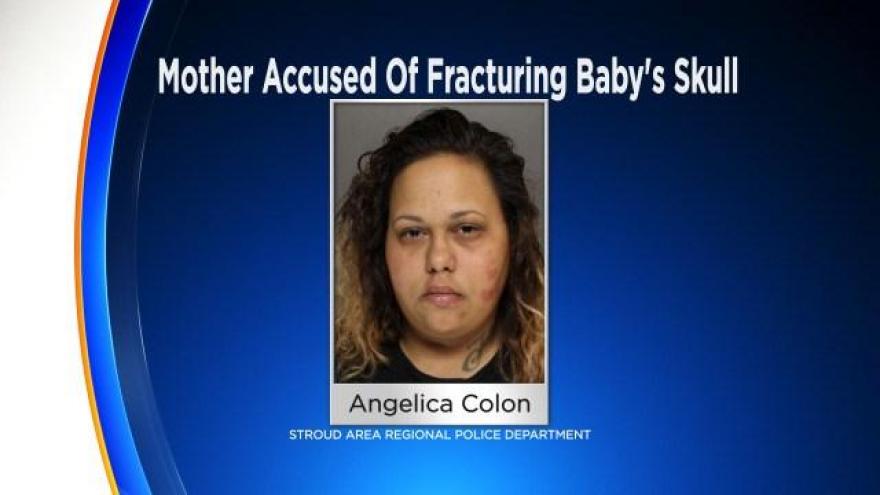 EAST STROUDSBURG, Pa. (CBS/AP) — Police say a Pennsylvania woman fractured her infant’s skull and tried to blame the injuries on her 6-year-old son.

Stroud Area Regional police say doctors determined the injuries to the 6-week-old were “massive” and “consistent with a punch, kick or slam.” Doctors also found evidence of past head trauma and say the boy likely will be disabled because of brain injuries.

“The infant continues to be hospitalized and is currently in stable condition. He has persistent breathing problems, is suffering from seizures, and is in need of constant intravenous fluids to regulate his fluid levels as the result of the injuries he sustained. The doctor’s prognosis is that the infant will suffer from lasting disabilities due to these injuries,” the police said in a statement.

Twenty-nine-year-old Angelica Colon is jailed on attempted homicide, aggravated assault, and other charges. A public defender for the East Stroudsburg woman didn’t immediately comment on the charges Tuesday.

Police interviewed Colon after the infant was first hospitalized April 13. They say she told them her 6-year-old son grabbed the boy out of his crib then accidentally dropped him, waking her up.

(TM and © Copyright 2017 CBS Radio Inc. and its relevant subsidiaries. CBS RADIO and EYE Logo TM and Copyright 2017 CBS Broadcasting Inc. Used under license. All Rights Reserved. This material may not be published, broadcast, rewritten, or redistributed. The Associated Press contributed to this report.)