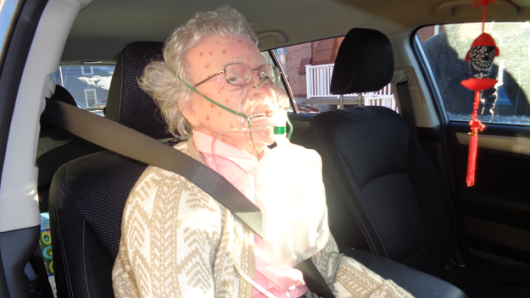 HUDSON, N.Y. (CBSNewYork) — A distraught caller contacted the Hudson police department around 8:30 a.m., claiming there was an elderly woman “frozen to death” inside a Subaru parked along City Hall Place, police said.

When officers arrived, they found what appeared to be an elderly woman sitting in the passenger seat of the car, wearing a seat belt and an oxygen mask.

Police said the car had snow covering it, suggesting it had been there overnight, and the temperature was around eight degrees.

Officers tried to find the car’s owner, but were unsuccessful and ultimately decided to break the rear passenger-side window and open the door.

Upon doing so, they realized the elderly woman wasn’t a real woman at all, but a mannequin, police said. The mannequin was “extremely realistic,” wearing real clothing, glasses and shoes with teeth and skin blemishes.

As it turned out, the car’s owner was a sales manager for a company that manufactures medical training aids, and the mannequin was a CPR training device.

Hudson Police Chief Edward Moore said the owner was “incredulous” that the officers had broken his window.

“Just to clear the record, all citizens of Hudson should be put on notice that if you park your locked vehicle on the street on a sub-zero night with a life-size realistic mannequin seated in it… we will break your window,” Moore said in a statement. “I commend everyone who responded with the intentions to help an elderly woman.”