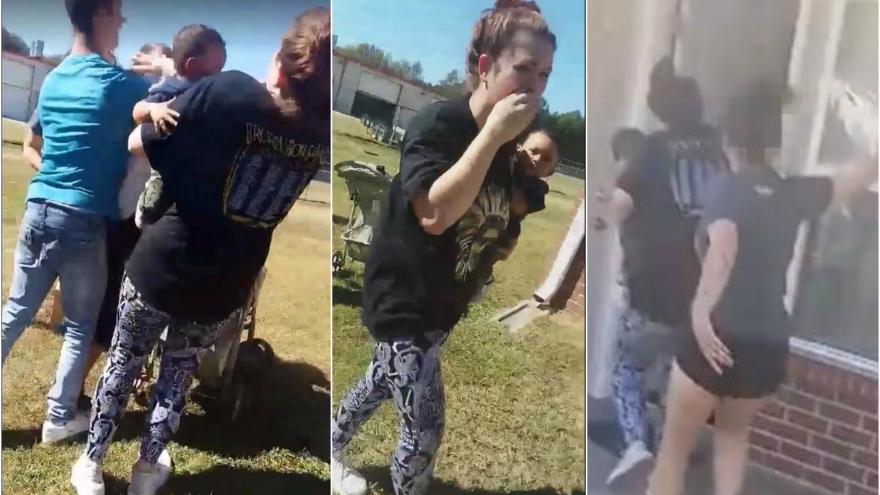 MCCURTAIN COUNTY, OK (KSLA) - A teenage girl has been taken into custody in connection with a fight involving a woman holding her 6-month-old son.

Police and Janie McCoy's father confirm that the altercation occurred the afternoon of Oct. 18 in Broken Bow, Okla.

Now cell phone videos of the confrontation are going viral on Facebook.

And an online petition calls for arrests in the case.

The juvenile was apprehended Tuesday afternoon; then she and her mother appeared before a judge, a police dispatcher said.

No one else has been arrested, the dispatcher said.

Jeremy McCoy, of Broken Bow, Okla., posted a video on Facebook about 6 p.m. Monday with the explanation: "Hate to post this of my daughter being assaulted by 2 girls, and nothing has been done yet 5 days later. So please share."

That post has since been shared about 121,000 times and viewed more than 6 million times.

A related video was posted the same day on YouTube by a user identified as Ray McElhaney. Accompanying it was the comment "Broken Bow, Okla., cops never arrested the other 2 for punching the girl holding the child."

Janie McCoy told KSLA News 12 in a phone interview Tuesday that she and her son were invited to a friend's home six days ago.

She says she was swinging with her son when three girls started running toward her and shouting.

"In that moment, I did not want to fight. I had my son with me; and if you know me, then you know that my kid comes first."

The video shows her asking the girls why they were confronting her.

"They said that I said something about somebody wanting to fight somebody that I had no idea what they was talking about," Janie McCoy recalled.

The video also shows one of the girls yelling at Janie McCoy then turning to someone and asking them to "get her baby."

"She said she didn't care if I had my baby in my hand or not," Janie McCoy said.

"I tried to get away from the situation and, as you can see, they struck me anyways."

In the YouTube video, Janie McCoy can be seen being struck once on the face and knocked to the ground with her son in her arms.

In the video her father posted on Facebook, Janie McCoy tries to drive the other girls away by urging them that her son is only 6 months old.

One of the girls then says in the video "I don't give a-" and strikes Janie McCoy in the face again.

That same girl later follow Janie McCoy and her son all the way to the door of her friend's apartment, striking Janie McCoy on the back before she could disappear inside.

Janie McCoy said she suffered bruising on her cheek and a busted lip but her son made it out unhurt.

"I took him to the doctor to make sure everything was OK. He wasn't hurt or anything, thank God."

Meantime, a petition that was started early Monday morning at change.org has since gotten more than 2,000 signatures.

The "McCurtain County Sheriff's Department: Justice for Janie McCoy" page created by a Ken McKinney includes a screen grab of McCoy's Facebook post and the following comment. (The person's name has been deleted because she is a minor):

"Janie was assaulted and mistreated by the girl (name deleted). (Name deleted) not only assaulted Janie but put the life of that innocent child in danger. That went too far and anyone who assaults a mother with a child in their arms deserves punishment to the fullest extent of the law."

Jeremy McCoy told KSLA News 12 on Tuesday afternoon that he now is overwhelmed by the back and forth with police over whether a report about the altercation has or has not been completed.

He referred further questions to his daughter.