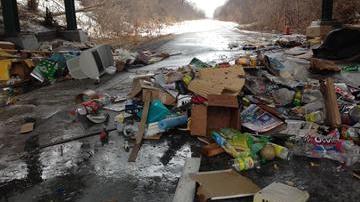 MILWAUKEE-- The Department of Natural Resources is trying to determine who dumped huge piles of garbage on the Hank Aaron State Trail under the 70th street bridge on Tuesday night.

Some of the items dumped include old computer screens, an old tv, a kitchen sink, boards with nails and other discarded household items.

\"I cant imagine somebodys thinking when they do this to begin with, its extremely odd,\" said Melisa Cook, who manages the Hank Aaaron State Trail.

Cook said garbage usually piles up in the winter months, but not to this extent.

\"This is extremely unusual because it looks like someone was in the process of moving and then decided they just wanted to get rid of this,\" said Cook.

CBS 58 News learned about the piles of trash after a viewer reached out to our newsroom. The trail is frequently used by people who enjoy running or walking in the great outdoors.

\"It's really dissapointing that somebody would do this because this is public space... a place people should be able to enjoy,\" said Cook.

Cook is working to get the trash cleaned up and trying to find out who did it. In the meantime, she's asking people who use the trail in that area to be safe and be aware of broken glass.