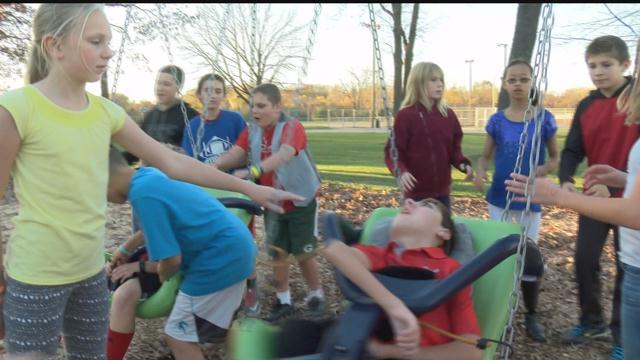 Jack Miller may only be in elementary school, but he has a lot to say.

"Would you want to sit in a wheelchair and watch the others playing?" he said.

That question is in a letter he wrote about his friend Todd. Tiara Tran wrote one too.

"Every 11-year-old needs to have been on a swing and I want Todd to have had that chance," she said.

Todd Brayman, now 12, has an undiagnosed genetic disorder that confines him to a wheelchair. But, his mother Mindy said it doesn't stop him from enjoying what he loves.

On a recent class picnic to Pewaukee Village Park, Todd's fifth grade classmates noticed that happy was gone. Todd had to watch them play, because there was no equipment for him.

"I think I heard from at least seven or eight of them how disappointing it was because Todd wasn't able to enjoy anything and how they felt bad," Zisky said.

So, she turned their sadness into action.

With the help of their Horizon Elementary School teacher Lisa O'Hern, all of Todd's 22 classmates wrote letters to Pewaukee village leaders demanding they put in an adaptive swing.

"Not only would an adaptive swing make kids like Todd not as bored," Tran wrote. "But it would give them a sense of being like their peers."

"The thing that would cheer him up would be an adaptive swing," wrote Miller.

"Tears," said O'Hern about reading the students letters. "It was very, very emotional. Still is."

Months after their plea, village leaders answered, spending thousands of dollars to install the first adaptive swings in Pewaukee.

"It's so touching to me," said Mindy Brayman. "It warms my heart, gives me the biggest smile I could ever have."

The feeling is contagious as Todd's classmates can't get enough of him and vice versa, now that a barrier that once divided them is broken.

"There's no way we could ever truly thank these kids for doing their part to make something happen for someone, a peer, a friend," Zisky said.

"I know I can tech them math, science and social studies," said O'Hern. "But if you can really get them to learn about each others differences, to overcome anything, to trust each other, to work together, to love each other, I think that's more important than any math assignment."