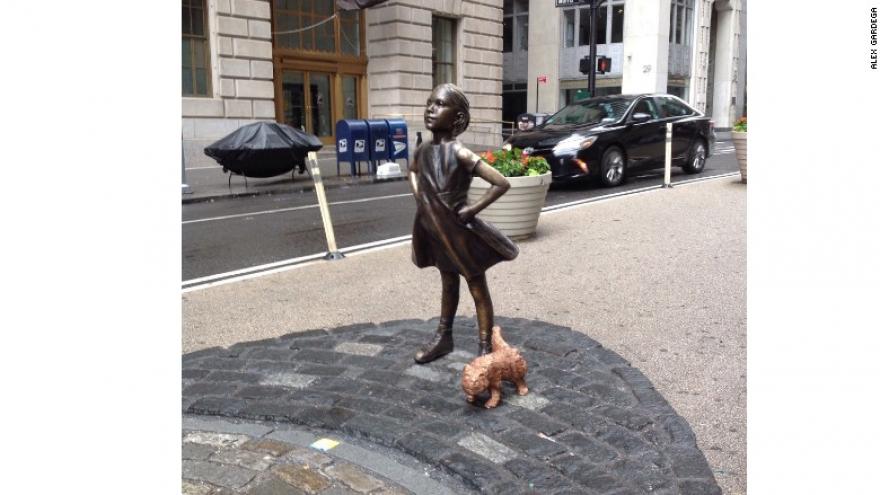 (CNNMoney) Fearless Girl and the Charging Bull were joined briefly on Monday morning by a third statue, a urinating dog.

The roughly-hewn pug, made partially out of papier mache, was relieving himself at Fearless Girl's feet. The creator of "Peeing Pug," New York City artist Alex Gardega, wanted to draw attention to the fact that the Fearless Girl was commissioned by asset-manager State Street Global Advisors.

The artist removed the statue after a few hours because "people were kicking it," and broke the pug's leg. The artist has since fixed the injury.

The Fearless Girl statue by artist Kristen Visbal was unveiled on March 7 and has been incredibly well received. Fans have flocked to her side to snap photos, and she's received tons of press coverage -- nearly all of which notes that the statue is backed by State Street.

Still, Gardega says not everyone is aware of the sponsorship. "I don't like when things of have a false front," he said.

Gardega adds that his dog was also meant to make a point on behalf of sculptor Arturo di Modica, who created the Charging Bull statue that stands opposite of Fearless Girl.

Di Modica argues that Fearless Girl is infringing on his copyright. Gardega doesn't know Di Modica personally, but was bothered by Fearless Girl's proximity to the Charging Bull.

"It's kind of like sticking something... in front of Michelangelo's David," he said. By having his pug pee on Fearless Girl, he was "showing what it was like to invade [the bull's] space."

Visbal did not immediately respond to requests for comment.

Ultimately, he worries that the Fearless Girl will be seen as comparable to the Wall Street bull, which was funded by Di Modica himself. "I would totally be pro [Fearless Girl] if it was done by some punk-rock artist," Gardega said. "That's not the case at all."

Gardega understands that Fearless Girl is important to people. "I did notice it made people happy, which is a good thing," he said. But he disagrees with the message he thinks Fearless Girl is sending. "I'm pro-feminist," he said, "but that's kind of corporate baloney feminism."

Public support for Fearless Girl inspired the mayor to extend her permit from one week through at least February 2018.

In a statement, a State Street spokesperson said "We continue to be grateful to the countless people around the world who... responded so enthusiastically to what the Fearless Girl represents -- the power and potential of having more women in leadership."