Paul Ryan: 'I'm just not ready' to back Donald Trump 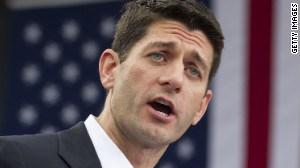 "I'm just not ready to do that at this point. I'm not there right now," the Wisconsin Republican told CNN's "The Lead with Jake Tapper" in an interview.
Ryan's position makes him the highest-level GOP official to reject Trump since the real estate mogul became the last candidate standing in the party's nominating contest.
He said he hopes to eventually back Trump and "to be a part of this unifying process." The first moves, though, he said, must come from Trump.
Ryan said he wants Trump to unify "all wings of the Republican Party and the conservative movement," and then run a campaign that will allow Americans to "have something that they're proud to support and proud to be a part of."
"And we've got a ways to go from here to there," Ryan said.
Asked whether Trump's proposed Muslim ban, his opposition to free trade and his call to deport 12 million undocumented immigrants would preclude him from ever supporting Trump, Ryan said: "We got work to do."
"The bulk of the burden on unifying the party will have to come from our presumptive nominee," Ryan said. "I don't want to underplay what he accomplished. ... But he also inherits something very special, that's very special to a lot of us. This is the party of Lincoln and Reagan and Jack Kemp. And we don't always nominate a Lincoln or a Reagan every four years, but we hope that our nominee aspires to be Lincoln- or Reagan-esque -- that that person advances the principles of our party and appeals to a wide, vast majority of Americans."
Ryan's comments were striking because Senate Majority Leader Mitch McConnell said Wednesday night that he'd back Trump.
Neither of the last two Republican presidents -- George H.W. Bush and George W. Bush -- will attend the GOP convention in Cleveland. Nor will the 2008 nominee, John McCain, or the 2012 nominee, Mitt Romney.
Ryan has expressed misgivings about Trump's campaign for months.
When Trump proposed indefinitely banning Muslims from the United States in December, Ryan responded that such a move is "not who we are as a party" and in violation of the Constitution.
"This is not conservatism," he said then, adding, "Some of our best and biggest allies in this struggle and fight against radical Islam terror are Muslims."
Share this article: