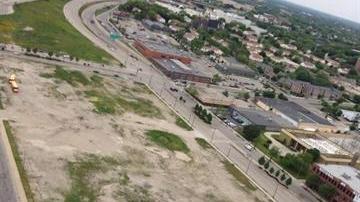 MILWAUKEE -- The wide open space north of the Juneau Avenue and West of Old World 3rd Street sits vacant - and has for a long time.  City and county leaders hope that changes.

The video shows a view from one of the successful buildings in park east - The Moderne.

You can clearly see the four plots of land available in Park East.

Previous projects failed here.  It was initially going to be a freeway that circled the city. That never really came to be and was torn down. Then Kohl's almost moved in, that didn't materialize.

Now the city and county teams up with real estate leaders to try and get developers into this area.

Milwaukee County Executive Chris Abele says this approach will make things move fast.  He says it's unique because they're taking an aggressive approach instead of a passive one.

\"It's complicated to work down here,\" Abele said.  \"Developers don't always know who am I working with. Who do I have to go to for zoning. We answered that by creating a joint proposal process, one that satisfies city and county. It's going to be easier for people to understand what they need to do.\"

There's also an aggressive outreach plan to get developers interested.

After the press conference Mayor Barrett addressed a question about what this means for a new arena downtown.

\"We will certainly find a space for an arena downtown, but I don't think this necessarily needs to be the space,\" Barrett said.

The County Executive agreed and added, through a spokesperson, that the best use for the land is development that creates jobs and a tax base.

The news on Tuesday does not stop someone from buying the space for a new arena.