Parents of Boy, Burned in Suspected Arson, Want You to Take Action 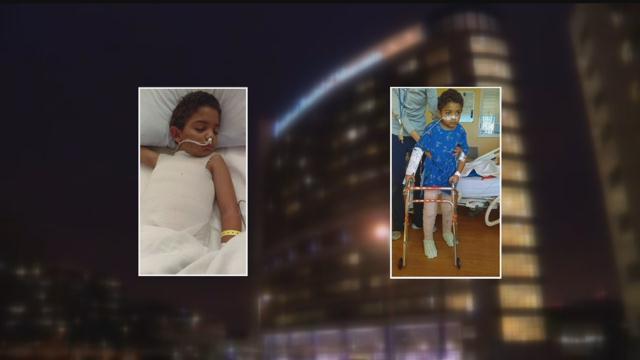 The family of a little boy is asking for your help in finding the person who started a fire inside their apartment. The flames left him with second and third degree burns. The fire happened early in the morning October 30, 2016 while Dominick Wright was sleeping on the sofa in the living room of their West Allis apartment. 34 nights and two skin grafts later, there have been no arrests and Dominick is still in the hospital.

"He was wrapped up in his blanket, two blankets, yeah," said Katie and Fredrick, Dominick's parents. "It was probably burning, he threw the blanket off and then he walked through it."

They think maybe the person cut the screen and threw a burning bottle inside their home.

"You know, it could have been, like the detective said, somebody just messing around on Halloween," Katie said.

Whatever the case may be, it's caused a lot of problems.

"Two actual grafts, but the other ones were bandage changes and since they were so in-depth, and pain wise, he had to be sedated," Katie added.

His parents are hoping you'll say something if you know something.

"You hear anything? Anything, any little tiny tip, please say something," his parents said. "We want justice for Dominick, I think he deserves that."

Sections of the carpeting and their ottoman are being tested to see which accelerant was used in the fire. Meantime, Dominick's favorite foods will be waiting for him when he leaves the hospital, pizza and blackberries.