Over 500 Protesters March on GOP Debate 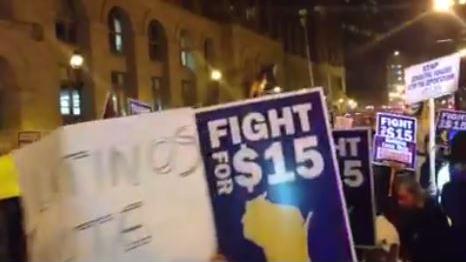 Protestors beginning to arrive at the Milwaukee Theatre. #MKEDebate2015 pic.twitter.com/nLe1TPC1mP

Voces de la Frontera partnered with a number of organizations for a 'Stop the Hate' march.

At one point MPD officers had to use fire extinguishers to put out a burning American flag.

The loudest group of protesters gathered behind the Coalition for Justice and the Hamilton family as they took to the streets to protest Tuesday's federal decision to not press criminal civil chargers against former Milwaukee Police Officer Christopher Manney.

Protesters from a variety of causes have taken to the streets. Some...

Police prevented protesters from getting too close to the Milwaukee Theatre.