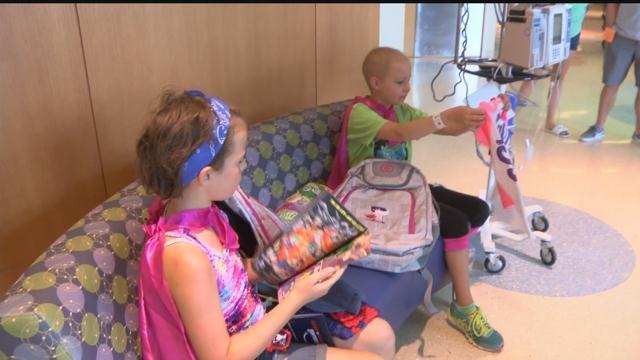 Twin girls battling Leukemia got a surprise at Children's Hospital of Wisconsin in order to lift their spirits and help them through the fight of their lives.

CBS 58 first shared Lily and Bailey's story in April 2015 when their classmates spent an entire week raising money for their family.

Now, the twin sisters are talking about gifts they received from the organization \"Gamerosity\" from Oregon.

\"To travel that far, it's pretty far, just to give kids some joy, it's really awesome,\" said 10-year-old Bailey Dove who was just diagnosed with Leukemia in April 2015, two years after her twin sister was diagnosed.

\"We are finishing a road with lily and now on a new journey with bailey,\" said Erin Dove, Lily and Bailey's mother. \"Starting over with Bailey has been kind of surreal... we kind of thought we were at the end but now we are starting over again.\"

Even though it's been a difficult journey, the Dove family is trying to stay strong with the support of their community and kind gestures from organizations like Gamerosity.

\"I know they do that on a volunteer basis and that's incredible... and to come all this way and deliver some fun for my girls, is special to me,\" Dove said.

Lily and Bailey received a backpack full of goodies to keep them entertained, including an iPad mini. But most importantly, they received a pink cape because as they fight cancer, Gamerosity wants them to know, they are heroes.

\"It's about empowerment and it's letting the kids know they are not only admired but admired for strength, not for being patients,\" said Manny Munoz, founder and Executive Director of Gamerosity.

Munoz is a cancer survivor himself and created the organization in 2013.

\"My original hope was, for the calendar year, to raise enough support for 50 packages. In that first year we raised enough for 115,\" Munoz said.

As of date, the organization has delivered close to 350 \"hero packages\" across the country.

Gamerosity will host a \"Game on\" event on Saturday, August 8th at Marquette University. The event offers fun activities for the family and raises funds for \"hero packages.\" For more information, click here.