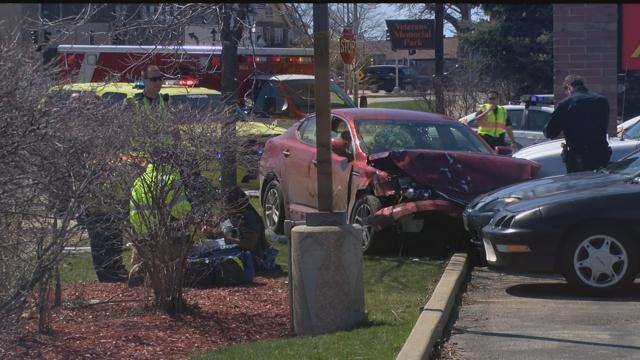 A number of cars are damaged after a police chase in West Allis Sunday afternoon. CBS 58 was at the spot where that chase ended at 69th and National Avenue.

West Allis Police aren't releasing much information about how the chase started, but it caused a big mess.

The car took out a bus stop sign and slammed into several other cars parked at an auto parts store.

The driver ran away, but police did eventually track him down and detain him. A woman inside the car was injured and taken to the hospital.

CBS 58 spoke to a witness of the intense chase, “four Sheriff's SUVs were behind that guy, and they weren't goofing around. Man, they were, they were on him, man, they went through red lights, they didn't touch the brakes at the red lights, it's a miracle that, I don't know how seriously anyone is hurt here but this could have ended up a lot worse than it did."

The Milwaukee County Sheriff's Department is now handling the investigation.