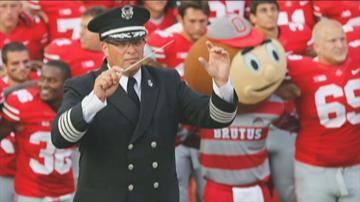 (CBS NEWS)--A scandal is rocking one of the country's most celebrated marching bands.

The leader of Ohio State University's \"Pride of the Buckeyes,\" Jonathan Waters, was fired after the school learned of widespread sexual harassment and intimidation among the performers, Shelby Croft of CBS News affiliate WBNS reports.

The ongoing sexual escapades, which took university officials by surprise, were uncovered by an investigation prompted by a parent's complaint two months ago. Officials were quick to take action, and they promised quick reform.

The Ohio State marching band is known for its precision and showmanship on the field. Videos of halftime tributes to Hollywood movies and Michael Jackson received millions of hits online.

But off the field, university investigators found evidence the band encouraged a \"sexualized culture,\" behavior they contend the ousted band director either knew about, or should have.

\"Jon Waters was terminated from his position as band director,\" said President Michael Drake. \"And we will move forward with the marching band season and launch a search for a permanent director now.\"

The two-month investigation uncovered a long list of sexually-charged situations. Band members were pressured to march up their stadium's ramp in their underwear. Upperclassmen gave raunchy nicknames to new members, who were often ordered to assume sexually suggestive poses. They were given sex surveys, dubbed \"rookie midterms,\" and told to walk down the aisle of their tour bus while other students tried to remove their clothing.

\"When everybody told you to get down to your underwear you weren't exactly sure what was going on,\" said former marching band member Jason Miaw. \"We try to keep it hidden around parents and in public.\"

While Waters admitted witnessing some of the questionable behavior, he told investigators he was open to making drastic changes. The band leader's attorney tells CBS News that many of the things the report talks about occurred years or decades before his client was band director.

He told CBS News, \"Jon is a very fine person who...is going to fight in one way or another to clear his good name.\"

\"Every single student on our campus must be able to learn, to grow and to experience Ohio State in a safe and positive environment,\" President Drake said. \"We will make this a better and safer institution. And we begin today.\"