Obama: 'I've got to take responsibility" for Democratic loss in midterms 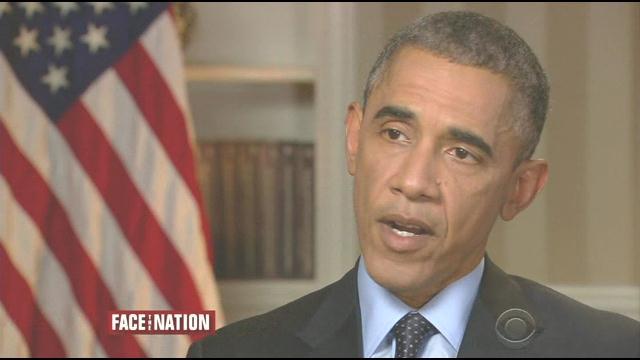 Days after the Democrats' brutal defeat in the midterm elections, President Obama said Sunday that he takes responsibility for his party's poor performance at the polls.

\"The buck stops right here at my desk,\" the President said in an interview on CBS' Face the Nation. \"And so whenever -- as the head of the party -- it doesn't do well, I've got to take responsibility for it.\"

Ahead of the election, Obama's approval rating was at presidential low, with more than half of all Americans saying they disapproved of the job the President was doing and only 41% saying they approved.

Vulnerable candidates in key battleground states made efforts to distance themselves from the commander-in-chief, with some publicly condemning his policies and others refusing his surrogacy on the campaign trail.

Reflecting on what he could have done differently and what he will change moving forward, Obama says he will work harder to become a better salesman.

\"I think that one thing that I do need to constantly remind myself and my team of is it's not enough just to build a better mousetrap. People don't automatically come beating to your door. We've got to sell it,\" Obama said. \"We've got to reach out to the other side and, where possible, persuade.\"

\"I think that what you'll see is a constant effort to improve the way we deliver service to customers...experimenting with ways that I can reach out to Republicans more effectively. Making sure that we're reaching out and using the private sector more effectively.\"

Looking back, the President admits that he sometimes struggled to work politics into policy negotiations, a weakness that affected his ability to communicate his positions to members of the opposite party and to the American people.

\"I think there are times -- there's no doubt about it -- where, you know, I think we have not been successful in going out there and letting people know what it is that we're trying to do and why this is the right direction,\" Obama said. \"So there is a failure of politics there that we've got to improve on.\"

It's a somber moment for the former senator, who will lead his last two years in the Oval Office determining whether or not to veto or sign bills coming from a Republican-led Congress. In retrospect, he now says he is learning to become a better legislator-in-chief.

\"One of the things we're learning is that there's a real power to being able to convene here in the White House. Not every problem has to be solved just through a bill. Just through legislation,\" Obama said.

The day following the midterms, the President addressed the country, saying he heard voters and their concerns through the polls. On Sunday, he detailed what that meant.

\"The message that I took from this election, and we've seen this in a number of elections, successive elections, is people want to see this city work,\" Obama said. \"They see Washington gridlocked and they're frustrated. And they know one person in Washington and that's the President of the United States.\"

Obama isn't the first, and won't be the last, president to see his party get swept in the final midterm elections during a two-term presidency. But now after witnessing his final election from the Oval Office, he says that he's realized \"campaigning and governance are two different things.\"

\"I've ran two successful campaigns,\" Obama said. \"And anybody who's seen me on the campaign trail can tell how much I love just being with the American people. And hearing what they care about and how passionate I am about trying to help them.\"

\"When you start governing there is a tendency sometimes, for me, to start thinking, 'As long as I get the policy right, then that's what should matter.' And people have asked, 'What do you need to do differently going forward?' And I think you do that gut check after every election.\"

In hindsight, Obama acknowledges that his critics were fair to condemn him for not trying hard enough to work with Republicans, saying he could have pushed harder to negotiate and get things done.

\"I think that what is also true is that no matter how frustrating it can sometimes be for any president to deal with an opposition that is, you know, pretty stubborn and where there are really strong differences, you've just got to keep on trying.\"

But one thing you can expect to see change -- according to the President -- in the next two years, is a shake-up at the White House.

\"We will be bringing in new folks here because people get tired, you know, it's a hard job,\" he said. \"And what I've told everybody is, you know, I want you to have as much enthusiasm and energy on the last day of this administration as you do right now or you did when you first started. Otherwise you shouldn't be here.\"