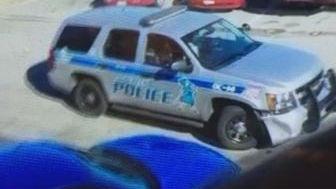 Oak Creek Police are looking for the driver who rammed a stolen car in to one of their squads.

A stolen blue dodge charger rammed into a squad car in a Motel 6 parking lot and then took off.

Officers are trying to figure out what led to the crime in the first place.

A hotel guest captures it all on video. Screeches are heard as the suspect gets away. The vehicle was backed into a parking stall in the parking lot of the motel on West College Avenue.

After checking the plates and finding out that the car was stolen, officers attempted to talk with the man. He ignored officers and rammed the police car with a K9 inside. The suspect also rammed a car parked next to it several times before finally pushing the cars out of the way and leaving the scene.

Oak Creek Police pursued the vehicle with other agencies before finally ending the chase.

The suspect remains on the run and police are still trying to track down the dodge charger with a rear license plate number of 5-0-7-T-Y-R.

If you happen to see this blue dodge charger, you are asked to contact police.