New Rolls-Royce SUV can drive in 21" of water, has built-in refrigerator 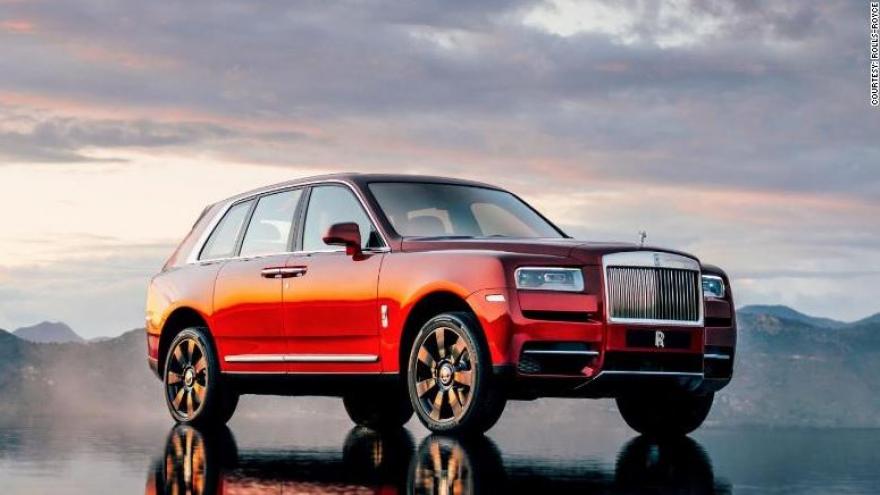 (CNN Money) -- Rolls-Royce vehicles boast of many outstanding features. The ability to drive through water nearly two feet deep is not usually one of them.

But the new Rolls-Royce Cullinan, just unveiled in London, can do that.

The British ultra-luxury automaker's first SUV can plow through 21 inches of water, drive right though deep snow and cross shifting desert sands while passengers ride in the back drinking champagne chilled in a built-in refrigerator.

There is no guarantee they won't hit a big bump and splash some on their jacket but, when venturing off-road, those are the risks one takes.

Go back a century and Rolls-Royce has a history of tackling difficult terrain. It was the favored vehicle of Lawrence Arabia during World War I and they were used as hunting cars by royalty in British colonial India.

In more recent decades, though, Rolls-Royce has been better known for providing ultimate comfort while traversing the world's paved motorways in cars like the Phantom, Wraith or Dawn.

The notion of four-wheeling in Rolls-Royce has returned thanks to the world's seemingly insatiable appetite for SUVs. Even Bentley and Lamborghini now offer them and Ferrari seems to be toying with the idea of something similar.

As expected of Rolls-Royce, which is still based in England but owned by Germany's BMW, the Cullinan takes passenger comfort to extremes. An optional glass partition separates the occupants' seats from the cargo compartment. That way, those inside are protected from possible harsh weather while luggage, or artwork, or what have you, is loaded into the back.

The cargo compartment is extraordinarily flexible. There's a removable parcel shelf and the cargo area floor can be lowered or raised using electric motors. The back seats can also be folded down, no big deal in most SUVs but a first for Rolls-Royce.

That's assuming you got the rear bench seat. If you prefer comfort to cargo space your other option is a pair of individual highly adjustable seats. Between them will be a drinks cabinet that holds Rolls-Royce whiskey glasses and a decanter, champagne flutes and a small refrigerator. Behind them, will be that glass partition.

The most extraordinary thing about the Cullinan, which is named after the world's largest diamond, is the amount of attention paid to actual off-road usability. With a base price of $325,000 and an average cost, including options, around $400,000, the idea of even taking one of these through a pothole would probably make many people blanch.

Rolls-Royce promises that the Cullinan will deliver the brand's famed "magic carpet" ride quality even in harsh terrain. That's thanks to the all-wheel-drive SUV's self-leveling air suspension. When driving off-road it can instantly push down on any wheel that computers sense is losing traction. It also has all-wheel steering to help with negotiating tight areas.

Buyers can also choose optional "recreation modules" that contain gear for activities such as base jumping, rock climbing, snowboarding or drone racing. These are designed to be easily slotted into the Cullinan's cargo bay where the gear is presented from a motorized drawer.

The first customers will get their new Cullinans around the end of this year, according to Rolls-Royce.