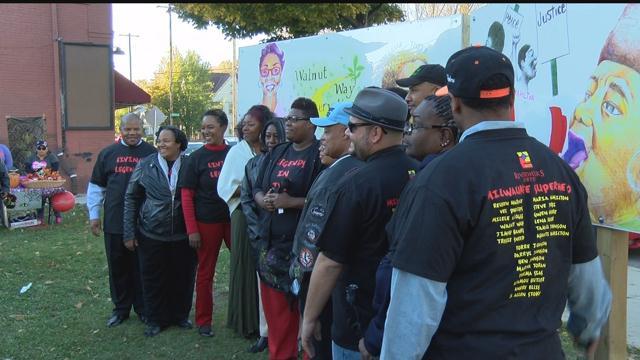 In the heart of the Harambee neighborhood, they unveiled a wall of super heroes who  weren't the invention of Marvel Comics.

Rather these heroes were born of the streets of Milwaukee.

The mural is located in a pocket part located near the intersection of Palmer and Keefe.

Composed by artist Jasmine West, the new mural features 18 community leaders who have made a difference in Milwaukee.

"This mural is more than a neighborhood beautification project," Alderwoman Coggs said. "It is about honoring people who care enough to make a positive impact where it counts, showing children in this neighborhood what a superhero actually looks like and demonstrating that they, too, can make a memorable impact on the community."

The celebration will include an artist talk from Jasmine West, inspiring words from the "superheroes" themselves, arts and crafts by Harambee Resident Tressie Sneed, free food and more.

"I'm excited about the unveiling of this project in a neighborhood where I grew up and went to school," Alderman Hamilton said. "I know there are many more heroes growing up in this neighborhood right now, and I hope to see their faces on this mural someday."

Bridney Chappel of Riverworks Development Corporation that organized the art project, says this is a way to let residents know it is possible to grow up and become Common Council member or a Senator.

"You don't always have to be a lawyer," Chappel added. "You can do good work in your community. You can contribute to community in a bunch of different ways."

The mural was featured Monday on "Our Stories with Michele" a regular feature on the CBS 58 News at 4 p.m. that seeks to shine a light on good works in the community and give us all a complete perspective of the place we call home.