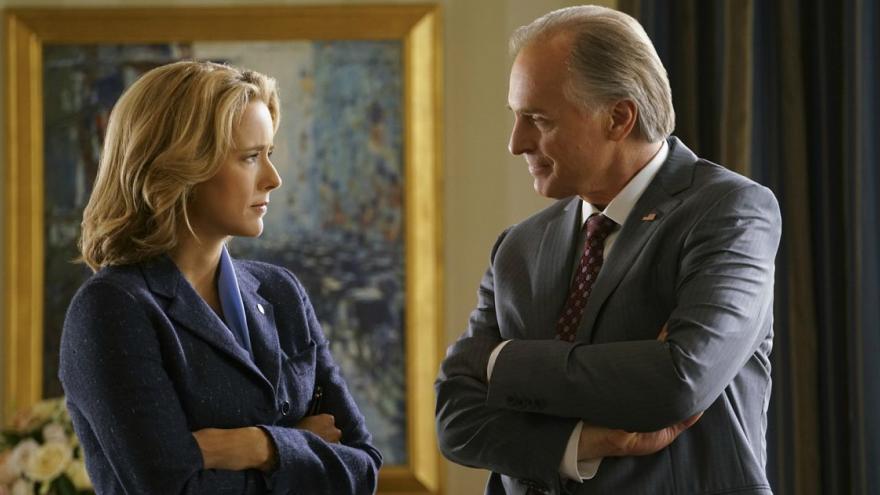 (CNN) -- The fictional White House in "Madam Secretary" will provide viewers with a crash course in the implementation of the 25th Amendment -- the mechanism for removing the president from office -- in the CBS drama's next episode, titled "Sound and Fury."

If it sounds like the show's writers are copying reality -- and specifically, reports about staffers frequently discussing the amendment's invocation in Michael Wolff's book, "Fire and Fury: Inside the Trump White House" -- they maintain that reality is, in part, imitating them.

The episode, in fact, was written and shot in October and November, long before the release of Wolff's book. The title is derived from a well-known quote in Shakespeare's "Macbeth," with the "sound" referring to a believed sonic attack on an American embassy -- itself mirroring what is alleged to have happened in Cuba -- and the "fury" describing the response from President Dalton, played by Keith Carradine.

Specifically, President Dalton is convinced the attack was perpetrated by the Russians, and threatens a response of "overwhelming force and ferocity." Fears associated with the Commander in Chief's escalation of hostilities with another nuclear power prompt his Secretary of State, Elizabeth McCord (Tea Leoni), and other members of the cabinet to discuss the drastic step of using the 25th Amendment to avert a crisis, leading to a fairly detailed discussion of its mechanisms.

In the course of the debate, McCord's husband, played by Tim Daly, notes that despite the strength of the U.S.' constitutional system, the government is ultimately "only as good as the people in charge."

Watched by about 9 million people a week, "Madam Secretary" seeks to represent a spectrum of viewpoints, and tries to stay ahead of the curve in terms of current events.

The goal in tackling the 25th Amendment plot, Hall said, was to offer both drama and a bit of a civics lesson -- to "show people what the process was."

Despite the polarized political environment, Hall said she rarely hears that viewers have been so angered by an episode that they will cease watching the show. An exception, she said, was when "Madam Secretary" took a clear position on climate change. (The conservative Media Research Center's Newsbusters site accused the program of engaging in "climate change propaganda.")

Hall said it can be "eerie sometimes" when a plot that the writers have conjured well in advance later arises in reality. As for the risk of alienating viewers, she said, "The biggest response we get lately is 'I wish government could be like this.'"