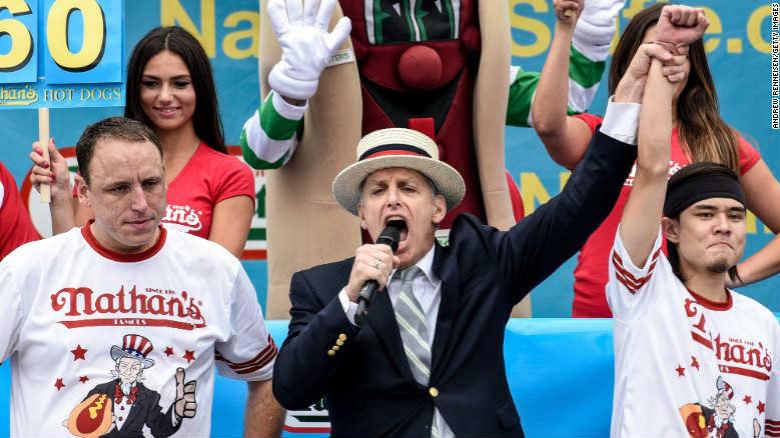 For the first time in nearly a decade, the world's hot dog king is someone not named Joey Chestnut.

A smiling Stonie told the crowd it was surreal to win on the sport's biggest stage.

He was a humble victor.

\"Joey is an amazing competitor,\" Stonie said of his rival.

\"I know he brings 100% to the Fourth of July and he is a legend of the sport,\" he told ESPN2, which broadcast the event.

\"To beat him by a couple of hot dogs this year is... you know I trained hard for this and I can't say I came in confident, but I came prepared,\" Stonie said.

Fans wearing Nathan's hats cheered for Stonie throughout the competition while others held signs reading \"Joey ate my lunch.\"

Chestnut had won eight straight titles at the eating contest at Brooklyn's Coney Island. He still holds the record of 69 hot dogs from his 2013 competition.

\"I just had trouble,\" Chestnut said after the competition. \"I was slow and he was eating fast.\"

Last year, Chestnut made additional headlines when he proposed to his girlfriend just before the competition, but the two split earlier this year.

\"I did bad, he deserved to win,\" Chestnut said of Stonie.

\"I've been looking for a competition for a long time and now I have it, and now he's made me hungry,\" Chestnut said, and vowed he'd definitely come back for a rematch next year.

Shortly after the reigning king was defeated, Nathan's tweeted thanks to Chestnut, saying he has been an \"incredible champion for 8-straight years & showed his class in his defeat.\"

Asked on Twitter how he prepared for the contest, Chestnut tweeted, \"I eat almost no solid food for about 2 days before a big contest. Keep loose and empty with lots of liquid.\"

In the women's competition, Miki Sudo won for the second consecutive year, eating 38 hot dogs -- four more than her mark last year. The runner-up was Sonya Thomas, who still holds the women's contest record of 45 dogs.

\"Compared to last year I was incredibly underprepared,\" Sudo told ESPN. \"I hadn't practiced but somehow was able to pull it off.\"