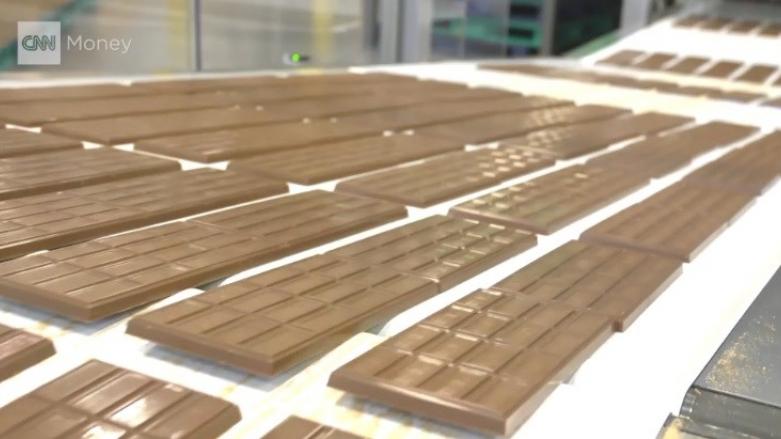 Nestle has found a way of reducing the sugar content of its chocolate by as much as 40%. And it should taste just as sweet.

The global chocolate maker has found a way of hollowing out sugar particles, and is applying for a patent, a spokesperson said. The Swiss company plans to start rolling out products containing the new sugar in 2018.

(CNN) The maker of KitKat and Rolo said the new particles dissolve faster to deliver a sweet sensation more quickly than traditional sugar. But it was tight-lipped about further details of its innovation.

It said it couldn't comment on issues related to calories, costs and regulatory approvals while it was in the process of patenting the product. It also wouldn't say exactly which products would contain the new sugar, saying only it was "looking at confectionery first."

Nestle began developing its new hollow sugar in 2015 at research centers in Switzerland and the U.K.

It says it only uses "natural ingredients" and the final product is still sugar, not an artificial sweetener like Splenda.

Food and beverage firms are under mounting pressure to reduce sugar in their products.

The U.S. Department of Agriculture's newest guidelines recommend people consume no more than 10 teaspoons of sugar a day. But most Americans eat way more than that -- around 30 to 40 teaspoons a day.

Nestle and competitors like PepsiCo and Mondelez have publicly committed to cutting back on sugar and salt to satisfy customers who are looking for more healthy food options.

PepsiCo -- which also owns brands including Gatorade and Tropicana -- announced in October that two-thirds of its single serving drinks would have 100 or fewer calories by 2025 as it cuts back on sugar. Currently, less than 40% of its drinks have 100 calories or fewer.

The introduction of sugar taxes around the world have also spurred companies to act.

Studies have shown that a Mexican soda tax, which was introduced nationwide in 2014, cut sales of sugary beverages. And the policy is projected to reduce the number of cases of type 2 diabetes, strokes and heart attacks in the country.

The U.K. is also planning to introduce a soda tax in 2018. A small number of U.S. cities are introducing soda taxes as well.