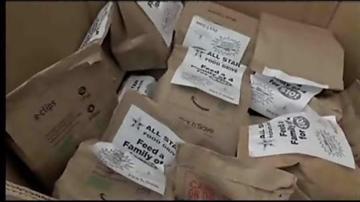 WEST MILWAUKEE -- The baseball All-Star game is over, but there's still plenty of time to pitch-in to help defeat childhood hunger in the area.

The goal is to fill up a large truck with thousands of pounds of healthy food items. The community can also support the cause by giving cash donations.

Leaders say it doesn't take much to make a difference. Donating just $10 can feed a family of four.

The Hunger Task Force does not charge fees for its services, so relies on donations alone to feed those in Milwaukee who would otherwise go hungry.

Director of Development Scott Marshall said it's critical to fulfill that mission now.

\"The kids are out of school and don't really have access to those school meals, so hunger actually spikes during the summer,\" he said. \"We know Milwaukee loves to go out to their festivals and donate to us during that, but we're giving them another opportunity to be able to reach out and help feed those kids.\"

To help the cause, the Pick 'N Save on Miller Parkway served up a brat lunch for $3 or a hot dog lunch for $2.

The organization will collect food and monetary donations at the grocery store location until 6 p.m. Wednesday.