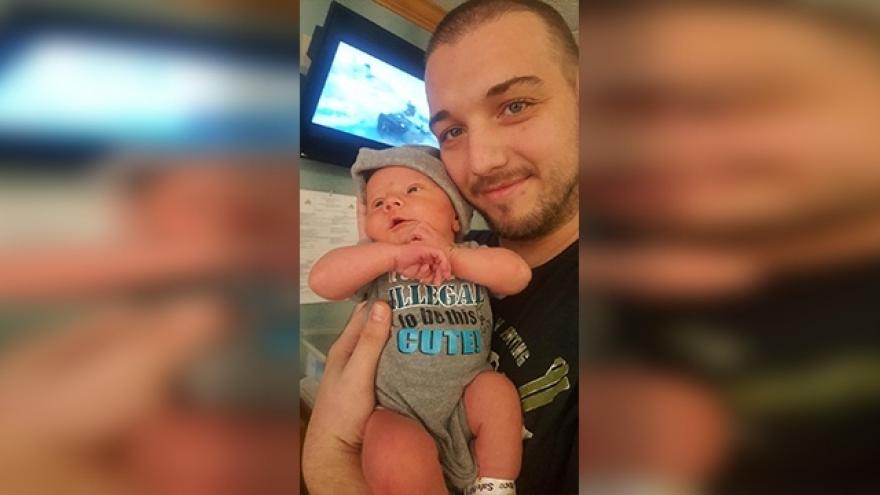 LANTANA, Fla. — Justin VanMeter, 28, started working at a pizza restaurant and as a server at Cracker Barrel after the birth of his son Ethan four months ago, said his older brother Kevin VanMeter.

“He wanted to provide for his new family,” said Kevin.

VanMeter had just finished a double shift at Cracker Barrel Sunday night, when a co-worker dropped him off at the Hypoluxo Food Market near his house.

Detectives said surveillance video in the store showed VanMeter buying cigarettes with a handful of his tip money as a man approached him and said something, shaking VanMeter’s hand.

When he left, detectives said video showed that man waiting outside, and then getting into a white Mazda which followed VanMeter down the alley, and then a flash of muzzle fire.

A store clerk called 911 after VanMeter made it back to the front of the store and collapsed.

When paramedics arrived, he asked them to “help me” and said he couldn’t breathe. He died 30 minutes later.

Detectives arrested Jean Mary Marcherno and Mcintosh Pierre-Paul at a nearby motel two days later. They had VanMeter’s flip phone and money, according to detectives.

Jean Mary Marcherno admitted he shot VanMeter, according to the arrest report but claimed VanMeter tried to buy drugs from him, called him a racist word and then choked him. Detectives said evidence showed VanMeter was shot in the back, and Marcherno’s story didn’t hold up.

He and Pierre-Paul were charged with first-degree homicide with a firearm and armed robbery.

VanMeter’s girlfriend Sam Luzenko said she can’t believe he is actually gone and cries when she thinks about their son never knowing his father.

“But at least I will have a little part of Justin with me forever,” she said about her infant son.

Kevin VanMeter said he doesn’t understand why the suspects didn’t just rob Justin, rather than shoot him.

“How long was he lying there on the sidewalk?” he said, his voice breaking.

The family is planning a funeral for Sunday and holding a fundraiser at Gilby’s Restaurant in Boynton Beach Thursday from 3-9 p.m. to help pay for it.

Kevin said they hope to get some money for the family his brother was so proud of.

“He deserved better, I don’t know what else to say,” he said.