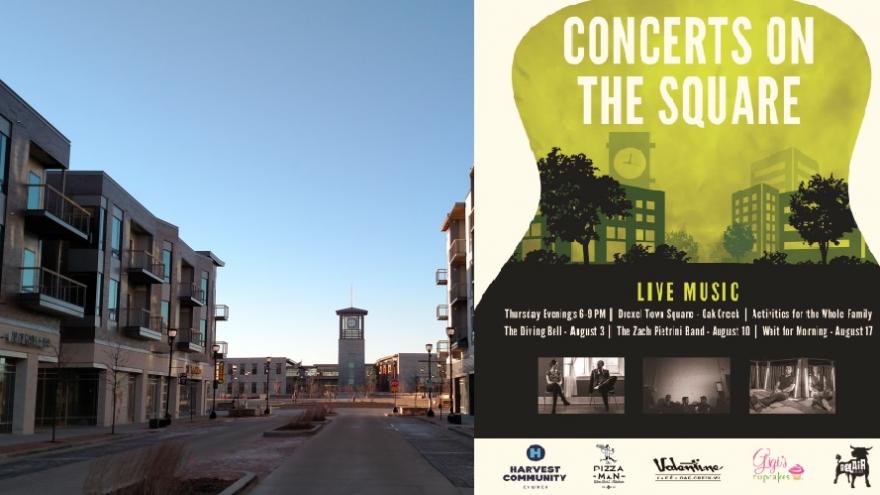 The new Drexel Town Square in Oak Creek will be the venue for free concerts for the community on Thursday night’s in August. The concert series is hosted by Harvest Community Church in Oak Creek and the businesses surrounding the square including Valentine’s Coffee, Bel Air Cantina, Gigi’s Cupcakes and Pizza Man.

The concerts will start at 6:00 PM with live music until 9:00 PM. On August 3 “The Diving Bell” will perform, Milwaukee’s own “The Zach Pietrini Band” will perform on August 10 and local band “Wait for Morning” will wrap up the concert series on August 17.

There will be activities for the whole family including a family tent with balloon animals, free popcorn, kids’ tattoos, and other kid friendly projects. The square also has its own splash pad so dress the kids in suits for some fun if the nights are warm.

Oak Creek’s Drexel Town Square is located at the corner of Drexel Avenue and Howell Avenue near Meijer.

The Diving Bell is a Chicago based Indie Folk/Rock band performing throughout the Great Lakes; featured on WGN Radio Chicago, WDET Detroit and AmericanSongwriter.com. The band consists of husband-and-wife duo Clare and Steve Hendershot (vocals, guitars, electronic drums), along with Graham Gilreath (drums), Jake Gordon (bass) and Charles Murphy (electric guitar, vocals). The Diving Bell is named after a proto-submarine that sailed near Panama in 1869 and was left to rust there. Behold the Bitter Monument, the Chicago band's first EP, tracks its journey of exploration, invention and discovery.

The Zach Pietrini Band is a favorite in Milwaukee performing numerous times at Summefest with music heard on Milwaukee’s own 88Nine Radio. Rooted in Milwaukee, WI, Zach Pietrini is "the definition of an up-and-coming musician in Milwaukee" (Milwaukee Record, 2017). The Zach Pietrini Band crafts brutally honest, instantly familiar songs that uphold old country standards but incorporate new rock sensibilities. With the diverse approach of Gram Parsons, the writing style of Ryan Adams, and the live show of Jason Isbell, they are the total Americana package. Serving as direct support for bands such as Huey Lewis and the News, Ray Wylie Hubbard and Miles Nielson it's no wonder why The Zach Pietrini Band has been nominated twice for best band in Milwaukee by 88Nine Radio Milwaukee. Pietrini has won the Wisconsin Singer Songwriter Contest, the Cool Notes Music Competition, and has been featured on Wisconsin Public Radio, the Troubadour Show(EU), 91.7 WMSE, and 414 Music (88Nine Radio Milwaukee).