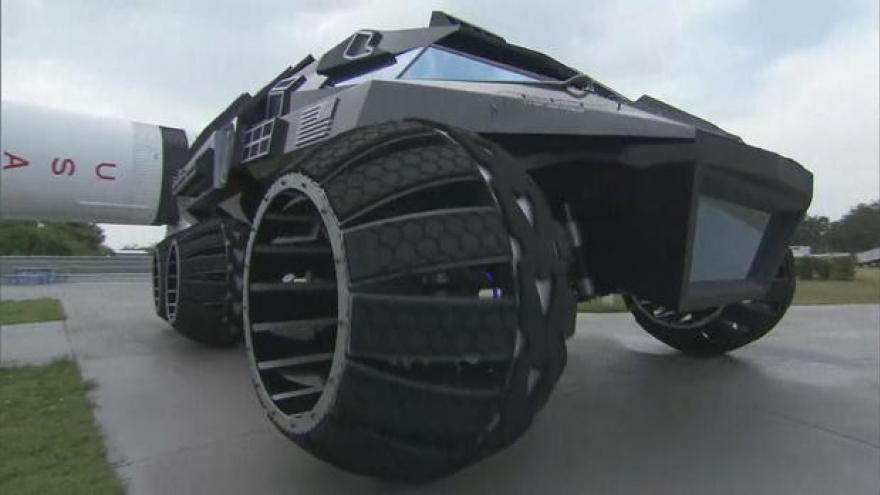 (CBSNews) It's been more than 40 years since the Viking One landed on Mars and sent back the first images from the red planet.

Since then, NASA has successfully operated six other unmanned landing craft and vehicles on the Martian surface.

This week, the space agency debuted its next generation mars rover, set to be launched in 2020.

But NASA is also showing off what a future manned Mars rover might look like. CBS News' Omar Villafranca went to the Kennedy Space Center for an inside look.

With six wheels and a distinctive alien design, visitors to the Kennedy Space Center complex have no idea what to make of this extraterrestrial machine.

The two made their names in Hollywood designing and building movie props, most notably the futuristic motorcycles in the movie "Tron."

Shanon designed the rover, and Marc and his team did the dirty work, constructing the whole thing in less than five months.

"There is almost nothing on this vehicle that was not built in our shop. I mean, down to every little bracket and tab, nothing was ordered out of a catalog. We built the body, the chassis, the suspension, the wheels, the frame, the interior, the seats, the glass -- everything on this vehicle had to be built completely from scratch," Marc explained.

"Some of this was just for design. You know, just for it to look cool. Other things that I thought, you know, this is kind of important to have," Shanon said.

The inside of the rover seats four and drives like an SUV, but there's also a mock lab in the back where astronauts could conceivably conduct experiments. Some of the features were designed with exploration in mind.

The brothers consulted with astronauts when building the machine, but this vehicle won't go to Mars.

Instead, its on an earthbound mission to educate future scientists about the red planet. U.S. astronaut Jon McBride flew two space shuttle missions and says putting the first person on Mars is closer than we think.

"We think that the first man or woman on Mars is somewhere between 8 and 18 years old as we speak," McBride said.

The Kennedy Space Center hopes to recreate the worldwide buzz from 2012, when the unmanned Curiosity rover landed on Mars.

Villafranca asked, "Is public enthusiasm, does that have any bearing on what is decided in Washington?"

"I think it has a lot of bearing. I was congressional director for NASA. People say, 'Well, you ought to write your congressman,' but very few people do that," McBride said.